Tatum caught up with Good Morning America’s Josh Elliott over the weekend while he prepped for the Super Bowl and the traffic it was going to bring to his bar. 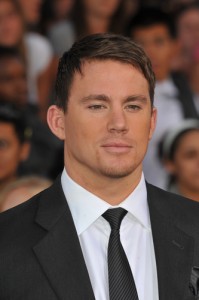 Tatum grew up in Mississippi, just five minutes from downton New Orleans. He said that he dreamed of growing up and partying in the French Quarter. While his life took him to the red carpet instead, Tatum opened a bar on Bourbon Street.

Saints & Sinners is a nod to the good times that can be found in New Orleans. Every night of the week has a different special, from Madam Mondays to Ladies Night Thursdays and Sporto Sundays. The atmosphere has a burlesque theme and by the looks of the Facebook page, people are really enjoying the place.

In his new film, Side Effects, Tatum plays Rooney Mara’s husband. Mara is mentally ill and under the care and treatment of Jude Law. It’s a psychological thriller that will keep you on the edge of your seat with the many twists. Josh Elliott had a small cameo in the film playing himself on a GMA segment about a new drug treatment.

Tatum captured more than the ladies’ hearts in Magic Mike, the true story of his experiences as a stripper. GMA’s Lara Spencer talked about the movie all summer and never lets the chance to reference the film go by.

It won’t be long before Tatum will have to put his bar hopping and rowdy Bourbon Street nights to rest. He and his wife are expecting their first child later this year. He said that he is terrified but really excited to be a dad.