Home > Good Morning America > GMA Beauty
When you buy through our links, we may earn an affiliate commission. As an Amazon Associate we earn from qualifying purchases. Learn more.

Emily Maynard and Jef Holm have called it quits. The engagement may have seemed like a reality show fairy tale as it unfolded last season on The Bachelorette. The couple has been dodging rumors of a split for a while now, always saying they were happy and sticking together. They even came on Good Morning America a few months ago saying they were together and Holm was actually moving closer to Maynard.

More rumors started circling  earlier this week when their social media pages started to change. Holm changed his Facebook status to single and changed his Twitter picture to a photo of himself, while Maynard changed her Twitter photo from a photo of the couple to a photo of herself and her little girl. Maynard was also spotted without her engagement ring a week ago.

Maynard said the relationship did not work for a number of reasons, citing Holm’s being more focused on building his company, rather than building their relationship.

Holm said the split was amicable and they have no hard feelings toward each other. He said it was hard to love someone so much, and it breaks his heart to see it end, but it did. 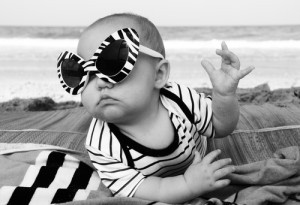 For years celebrities have dressed up their daughters with runway fashion. But the trend seems to be becoming gender neutral. Celebrities like Gwen Stefani, Kourtney Kardashian and Rachel Zoe have all been photographed with their baby boys styled like litter models.

The founder of the parenting website Big City Moms said babies used to babies. Mothers would show up to events with babies in onesies, but now every baby has some sort of fashion.

Moms say they love dressing their baby boys up in tight jeans, hats, sunglasses and using color blocking anytime they can. Even the moms on Good Morning America said they were a little disappointed when they found out they were having boys, saying they used to wish it was a girl. One mother even admitted to crying when she found out, but when she came to her senses, she realized boys can have cute clothes as well.

What is America coming to?

Good Morning America had a few fashionable mothers bring their fashionable baby boys on to the stage to discuss the outfits. One mother had cowboy boots and a nice belt on her boy. Another boy, Dylan, wore a very fashionable hat and his baby aviator glasses.

As for the husbands, one wife said she thought her husband liked it. She didn’t seem too confident or seem to care at all for that matter. All the mothers did say their husbands thought it was amusing.

Nate Berkus’ ‘Things That Matter is a coffee table book. Berkus told Good Morning America he wrote the book because people are so confused by interior design. He said there is so much information on the topic, but people are still confused.

Berkus said the interior designs need to tell the story of the people who live there. He said every part of his house is filled with things he loves. If it isn’t memorable to him or tells a story about him, he does not put it in his home. He also said it doesn’t matter the space you have. Berkus said he has converted old dance studios in Texas into cozy areas and tiny New York City apartments into comfy homes.

Berkus’ advice for people trying to spruce up their homes was to not worry about what is hot and hip at the moment. Fill the home with what you love. He demonstrated what he meant turning a bland coffee table into a welcoming piece of furniture, with only some baskets, a few books and couple of bowls.