Rosie O’Donnell revealed on her blog that she suffered a heart attack last week,  and it was the kind known as “the widow maker.” O’Donnell says it’s a miracle she’s alive. 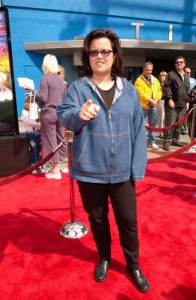 Rosie credits a Bayer asprin commercial for saving her life. O’Donnell, 50, says that she took an asprin last week after she experienced some chest pains, and now knows it was a heart attack.

“A few hours later my body hurt, I had an ache in my chest, both arms were sore and everything felt bruised,” she wrote.

O’Donnell originally thought she pulled a muscle, but then she started feeling nauseous, hot and experienced clammy skin.

A woman may have more subtle symptoms than men associated with a heart attack like dizziness, light-headedness, nausea, vomiting and fatigue.

“Maybe this is a heart attack,” O’Donnell wrote. “I Googled women’s heart attack symptoms, I had many of them but really? – I thought – naaaa.”

Experts say if you’re at the gym or being active and you notice something is different, that’s the time to call your doctor. O’Donnell didn’t immediately go to the hospital – she took the asprin and waiting until the next day to talk to her cardiologist. After visiting her cardiologist, she learned her coronary artery was 99% blocked, and doctors inserted a stent.

ABC News’ Lindsay Davis says things haven’t been easy for O’Donnell in 2012. Earlier this year she announced her fiancee Michelle Rounds was diagnosed with Desmoid Tumors. In March, her Oprah Winfrey Network show The Rosie Show was cancelled. Earlier this year, Rosie discussed her health problems with Dr Oz.

“Know the symptoms ladies,” O’Donnell wrote. “Listen to the voice inside, the one we all so easily ignore. CALL 911. Save yourself.”