In Oprah Winfrey’s new show Lovetown USA, she challenges a town to open their hearts to love.

Winfrey headed to Kingsland, Georgia for this social experiment that is the first of it’s kind. The goal? To find out what happens when an entire community focuses on love.

Brunson and Rosenberg joined Lara Spencer on Good Morning America to talk about the experience. Spencer asked Rosenberg if it was difficult to get the whole town on board. 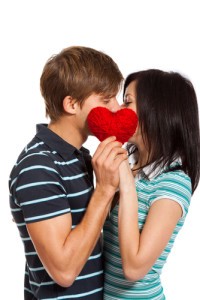 “There were lots of bah humbugs but there were some really good sports too,” Rosenberg said. “I think just being open to love and believing in love, that was the biggest challenge but getting them to the point where that love happened was pretty cool.”

Rosenberg said that love is beyond contagious, and that we all need it, deserve it and can have it.

Spencer asked Brunson for his tips to find love.

GMA: In it to Win it Or In it for a Minute Game

Brunson, Rosenberg and Spencer then put the advice to use with their audience, playing a game called, “In it to Win it Or In it For a Minute.” Spencer asked audience members for their love questions and the matchmakers determined if their love interests were in it for a minute or the long haul.

The first girl, “B,” who has been seeing a man for four months, said he was wonderful and plans all of their dates and takes her to nice dinners, but only on the weekends. During the week, she rarely hears from him and he will only contact her when he wants to hang out.

“Here’s why,” Brunson said. “He is planning, he is spending time with you, he’s probably just in the beginning of the relationship and need to spend more time. That’s the reason why we date, we court.”

“From the very beginning to the end we need healthy communication or the willingness to communicate and to show who we really are which we do, we show it pretty authentically so pay attention,” Rosenberg said.

Spencer added that he might just have a busy job.

The next audience member, Chris, was a man has been dating his girlfriend for a year and they  have plans to move in together. Recently, his girlfriend got a new job in the fashion industry and has been going to lots of exclusive parties. She doesn’t want him to come because he’s not “hip enough,” and he worries that if they move in together he’ll be left at home alone all the time.

Both Benson and Rosenberg agreed that the girlfriend was in it for a minute, and told Chris to come to them and they’d hook him up with someone better.

You can catch Lovetown, USA Sundays on OWN.