A painful divorce sent Monte’s shopping addiction spiraling out of control, and she found herself weighed down not only under debt, but also expensive clothes and shoes. 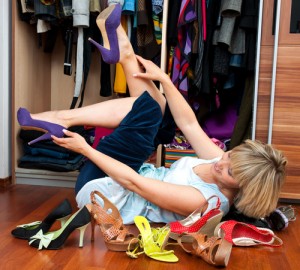 Good Morning America covered Monte's story, a woman from Tulsa with a High-End Designer Shopping Addiction who is now classified as a Hoarder.

Good Morning America special correspondent Cameron Mathison paid a visit to her 4,000 square foot home in Tulsa, Okla. Monte. did not want her last name revealed on the show. The 52-year-old retired teacher and mother of one has a home filled with brand new, unworn designer clothing.

Monte’s out of control habit was finally curbed after an intervention from the TLC show Hoarding: Buried Alive.

Monte’s entryway in her home was being used as a closet filled with shoes. She estimates she had 500 pairs of shoes before her Hoarding intervention.

“I was turning into someone I didn’t want to be,” Monte said.

Monte estimates that she has spent $500,000 on her clothing and shoes. Her problem continued even after she declared bankruptcy, and she continued to shop until her home was unlivable.

“People who hoard often have 20 percent more trauma than the average person,” Monte’s Psychologist Becky Beaton said. “In Monte’s case it was precipitated by a divorce.”

After three months, Monte is on the road to recovery.

Though Monte is a changed woman, she still has to work every day to battle her addiction. Almost every room in her house is now cleaned out, but she still has some clothing that is yet to be worn.

“I don’t really think that I cared that much about the stuff, it was more about just the pursuit of it,” Monte said.