Lucy MacDougall, 6, is thrilled with her new haircut. The tiny little girl with a big smile used to have long black hair, but now she sports a short pixie cut. Her mother, Jackie, loves the haircut, too, but it took a while to get used to. Jackie hated her own hair growing up, she wrote in her blog P.S. Jackie. 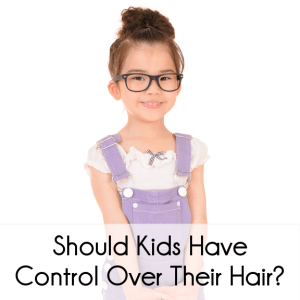 Jackie MacDougall let her 6-year-old make the big decision to get a fauxhawk. Parents on Facebook think that kids shouldn’t make these big decisions.

“So when I was blessed with my daughter,” Jackie blogged. “I latched onto her black, thick, shiny Asian hair like she was Rapunzel and I was desperately climbing for my one chance to experience long, flowing, gorgeous locks. Seriously, her hair is perfect.”

When Should Kids Get to Make Decisions?

Lucy came up with the idea to chop her long locks, but her mother said no. She thought that it was more acceptable for little girls to wear their hair long. But when Lucy kept insisting and decided on a fauxhawk, Jackie began thinking that she should let her daughter express herself however she feels like. They made the deal that the hair would grow until they could donate it to Wigs for Kids.

When the hair was cut, Lucy’s big smile got bigger. Jackie posted dramatic after cut photos and her daughter looks so happy with her punk hairdo. When Jackie asked her Facebook community what they thought, fans and friends said that she made a mistake by letting her 6-year-old choose her hairstyle.

Empowering Kids To Make Their Own Decisions

Jackie doesn’t want her daughter to have self-esteem issues and feel like she needs to please the public. She said that she has learned more from this than her daughter ever will. Even though Lucy’s friends thought she was a boy at first, her earrings and girly style tipped them off. She knows she looks “fantastic” and that’s all that matters.

Dr Karyn Gordon said this was an amazing decision for Jackie and her daughter. She believes that Jackie made a decision that empowers her daughter and more parents can learn from this lesson. It’s hair, it will grow back!

Things that are more permanent, such as tattoos, or decisions that coule hurt others are when parents need to step in, Dr Karyn Gordon said. This mom thought for six months and then donated the beautiful hair to Wigs for Kids. The decision to cut her daughters hair was not made lightly and she went about it in a positive way.