Harley Pasternak is the celebrity trainer responsible for Jessica Simpson’s swimsuit body, as well as the envied physiques of Katy Perry and Megan Fox. He was on Good Morning America to share his tricks for the summer slim down. 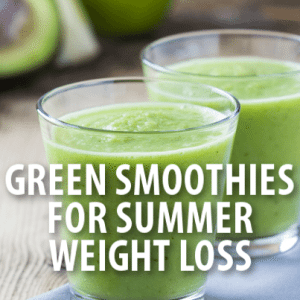 Harley Pasternak was on Good Morning America to talk about easy ways to slim down for summer, including with green smoothies. (tanjichica / Shutterstock)

Second, drink a gallon of cold water a day. Harley Pasternak says this tip can help you burn up to 100 extra calories a day. Plus, you’ll need plenty of hydration for all the walking you’ll be doing.

Next, Harley Pasternak said you need to say goodbye to baked goods. The extra calories and carbs keep the weight that you don’t want, and cutting it out of your diet will help you lose weight.

Finally, say hello to green smoothies. These smoothies are packed with nutrients and energy to keep you going through your day.

Two normal women, Justine and Jamie, started following Harley Pasternak’s advice in hopes to get in shape for summer. After a week, they said the hardest part was sticking to the diet, and being disciplined in eating. I can’t blame them, I’d miss baked goods too!

Both Justine and Jamie had already lost a little bit more than an inch in only a week, and they feel great. Jamie lost seven pounds in nine days. I guess it doesn’t take a ridiculous regime to get in shape.