Good Morning America said the smartest thing to do during the Hurricane Sandy storm is staying inside. Do not go to the beach or try to see the waves at all. Surge, which is very forceful water, accounts for 90% of the people killed during hurricanes, and some people are already in danger.

The HMS Bounty, a tall ship off the coast of North Carolina, was taking on two feet of water every hour. Around 9:45 p.m. the Coast Guard lost communication with the ship. The emergency beacon on the ship was turned on, sending a GPS signal to the Coast Guard requesting help. After the ship took on 10 feet of water, passengers were forced to abandon ship and the Coast Guard sent two helicopters to find the survivors. 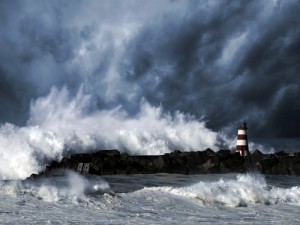 Good Morning America looks at a harrowing rescue of 14 people off the tall ship HMS Bounty. They also tell how to explain the hurricane to children & keeping them safe.

The worst of the storm surge will be around six to 10 feet, heading north towards Long Island where it will funnel water up the Hudson River and into Queens.

Children are going to be scared and parents need to talk to them.

Children may be seeing words such as ‘superstorm’ and ‘monster storm,’ and parents need to explain to children exactly what a hurricane is what these words mean. Also, limit the amount TV a child watches during the day. It could scare them more if they are not getting the right facts or if they do not know how to interpret those facts. Having an emergency plan with your children will also help them feel a bit more safe and secure.

As for Halloween, Good Morning America said to hide candy around the house and let the children dress up. If this is not possible, move Halloween to a new day and explain to the children why it was necessary to do so.