A lot of celebrities were manning the phones for a Day of Giving, from Snooki to Ethan Hawke.

Snooki, who called Seaside Heights her second home, said she and her roommates from the Jersey Shore are going to be having a separate benefit for the victims of Hurricane Sandy. She said she is doing everything she can to help, going so far as to donate all her clothes to the relief effort. 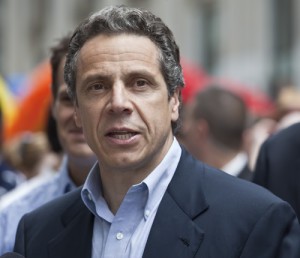 Good Morning America talks with New York Governor Andrew Cuomo about the devastation of Hurricane Sandy & communities all around New York and New Jersey are banding together. (lev radin / Shutterstock.com)

The one thing Americans do best is pulling together in times of tragedy. And neighbors have already begun to help other neighbors.

Breezy Point, New Jersey, was one of the towns hit hardest by the storm. After waves leveled houses, a fire ripped through the community burning down a significant number of houses. But this community has banded together to get through this tragic time.

The local fire department lost everything they had, but neighboring fire departments have come to lend the use of their trucks and their old equipment and uniforms. The relief for this neighborhood has finally begun.

Mass in the small community has been a chance for many people in the community to reflect and give thanks for everything they still have. People have been going door to door asking neighbors how they can help, other citizens have pulled up with carloads of blankets and the compassion from the everyone in the area, far and wide, can be felt in this small town.

New York Governor Andrew Cuomo called in to Good Morning America to say the greatest need that has to be met is getting power to the nearly 700,000 people without it, some of whom are living out in the streets in 40 degree weather. He said many people are in need of food, trash bags, gloves and clothing.

But he saw a silver lining in the disaster: the strength of all these communities. He said people from across the country are driving to the East Coast to help in any way they can. People from across America have hopped in their cars and headed east to help.

He ended the conversation by saying New York will be coming back better than it ever was.