Flatform shoes are all the rage this summer, but does that mean you should be wearing them? Plus, sparks flew between Rachel McAdams and Ryan Gosling behind the scenes of The Notebook, but not in the way you’re thinking. Get the scoop from Good Morning America. 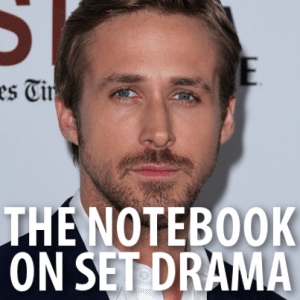 The director of The Notebook recently told VH1 that Ryan Gosling and Rachel McAdams couldn’t stop fighting on the set of The Notebook. (s_bukley / Shutterstock)

Flatforms are the hot shoes for summer. Miley Cyrus, Willow Smith, and Kate Bosworth have all been seen wearing this summer fashion trend, but some podiatrists are saying that the flatform shoe isn’t good for your feet.

New York podiatrists Dr. Positano doesn’t have many good things to say about the flatform shoe. He says the elevation combined with the inflexibility keeps the foot from moving in a natural way. According to Dr. Positano, “The normal foot should remain contact with the ground to be able to adapt to the terrain or the ground where the person is moving and walking.”

Dr. Positano also said that the flatform shoe can keep a person’s foot from absorbing shock in the right way, as well as make someone instable. “Often we’ll see a person develop what they call a lateral or an outside ankle injury where they actually will rip or tear a ligament, and even sometimes fracture a bone.”

Even one Vogue writer admitted that she tore a ligament while wearing these shoes. While the shoes may be fashionable for summer, you might want to consider a different trend to take part in.

The director of The Notebook revealed to VH1 recently that Rachel McAdams and Ryan Gosling didn’t always get along behind the scenes of The Notebook. At one point, the fighting got so bad that Ryan Gosling even said that they needed to get another actress to be in the film.

Even though things didn’t always run smoothly, the director helped Rachel McAdams and Ryan Gosling solve their problems to go on and film the movie. The two went on to have a real life relationship after filming The Notebook, but apparently it wasn’t love at first sight. Sara Haines said that knowing they fought on set makes the fight scenes in The Notebook seem more real, but Amy Robach said she wishes she still didn’t know.