Researchers at Rockefeller University, in New York City, have discovered what they think to be the Mommy Gene, a gene that seems to explain why some women seem destined to be mothers, while other take different paths in their lives. Researchers say the urge to nurture, feed and take care of a small child could be directly linked to a gene they have found. Although the studies have only been done on mice, it seems to relate to humans, according to the researchers.

Some mothers think gene is actually related to motherhood because some mothers said they have always felt they wanted to me mothers while other women who were interviewed think it is mere circumstance, saying some days they like being a mother more than others. 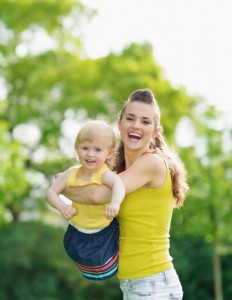 Good Morning America talks about the discovery of the Mommy Gene. Could genetics determine your desire for parenthood?

Melissa Lawrence, founder of the motherhood self-help website Cloud Mom, and Dr. Jennifer Ashton discussed what the mommy gene means to all the mothers in the world.

Dr. Ashton said their is no test to find out who has and who does not have the gene, but she believes it adds to the dialogue of whether it is nature or nurture  that makes a women a good mother. She also mentioned not every mother loves changing diapers, but that does not mean she can not be a good mother.

Good Morning America: Is There A Daddy Gene?

Lawrence said the discovery of the gene may make it harder on some women because they may asks themselves if they can be good moms without the gene and the answer is yes. Any women can be a good mother, according to both experts.

They also questioned if there could be a gene in men as well, which could be true but there is no research now. They both agreed the finding of the gene is just part of very complex issue on motherhood.

What do you think about the motherhood gene? I feel like any woman could be a mother. Let me know what you think.

Flea Market Flip, the HGTV show which pits two teams against each to find the best flea market deals, was supposed to happen on the show. But it was pouring down rain.

Instead Good Morning America gave a synopsis of the show which breaks down like this. Two teams are sent to the flea market with $500 and one hour to find three items they thing they can fix up. After making their purchases, the teams have one day to take whatever they found and make it into whatever they can. One team made a bicycle into a bar, while another team made a cool table out of some old wood and old tires. After they have fixed up their finds, they try to resell the items. Whoever makes the most money in the end goes home with $5,000.

Good Morning America stood outside in the ran and gave some tips on fixing up old flea market finds, such as reupholstering cushions and adding glass tops to stools to make fancy tables.