Sam Champion said on Good Morning America that on average, Americans find $90 in their couches when cleaning. Then he said he had no idea where that number came from, because he’s never found $90 in his couch. I haven’t, either. But one lucky audience member found plenty of cash on yesterday’s show in the Cash Couch in GMA’s studio. Now, another lucky audience member got the chance.

As soon as he learned he was getting a chance, the man did a crazy dance while screaming at the top of his lungs. Both Josh Elliott and Sam Champion seemed really startled by his reaction. His name was Jalen James and he was from North Carolina. The Cash Couch game rules said that Jalen had 30 seconds to search through the couch in the GMA studio for change. After that, he would go to the coin sorting machine and see how much money he got. 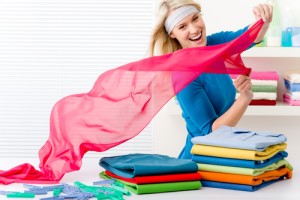 Lara Spencer chose to wear an extra scarf during the Spring Cleaning Challenge. This woman decided to twirl an extra scarf. Sam Champion would probably say this is a disqualifier, too.

Yesterday, Sam Champion helped out the winner of the contest long after the clock ended. But after Jalen’s time was up, he kept sneaking grabs of change while the other two hosts weren’t looking. At one point, he grabbed a jacket that was apparently part of the couch set and began riffling through its pockets, before putting it on. It was great to watch.

On March 8 2013, Lara Spencer and Sam Champion faced off in a Spring Cleaning Challenge. Sam Champion wanted revenge in a rematch because Lara Spencer was the clear winner. So it was time for another Spring Cleaning Challenge. Jeffrey Phillip, an organization and design specialist, said that his tip for everyone at home for spring cleaning was to not try to tackle everything at once, but start small and divide the project into zones.

Today’s challenge for Lara and Sam was to sort pens and pencils into an organizer in a drawer, then move onto folding laundry and finally, organizing shoes, bags and scarves onto a shelf in a closet. Lara Spencer got an early lead in the drawer organization, but Sam skipped over the laundry folding to try to win the closet step. Lara Spencer did each of the challenges in good time and finished by wrapping one of the scarves around her neck, which Sam Champion said should disqualify her, because she didn’t hang the scarf, she wore it.

What are your spring cleaning tips? Do you start with one room at a time or try to do all of it in one marathon day? Let us know in the comments!