As Americans prepare for Memorial Day Weekend, actor Gary Sinise has the troops on his mind. Britney Spears is already sparking controversy on The X Factor. Who is Keira Knightley engaged to? Plus, how well do you know The Mentalist Simon Baker? Use the links below to take the ET quiz and read tonight’s stories.

What compelled Britney Spears to walk out on The X Factor during her first day on the job? Could it all just be a stunt to fuel speculation, controversy, and ratings? Adam Levine gives Britney advice and reflects on Maroon 5’s success, as well as their upcoming album. Kelly Preston reveals her weight loss secrets. 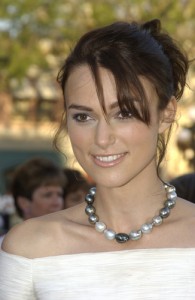 An actress has reason to celebrate this Memorial Day weekend. Who is Keira Knightley engaged to? (Featureflash / Shutterstock.com)

The Mentalist Simon Baker answers true or false questions about his own career beginnings. How well do you know the Australian star, and what question did he answer incorrectly? What A-listers are popping up as guest judges on the new season of HGTV’s Design Star? Plus, late breaking entertainment headlines, including Keira Knightley’s engagement.

This Memorial Day Weekend, it’s appropriate to reflect on US troops and their service to our country. That’s what the Gary Sinise Foundation does year round, performing concerts and raising money to support the troops abroad and once they return home. Plus, a US Olympic medalist is revealing the secret she kept for years. Find out why Dara Torres hid her Bulimia, and how she’s doing now, 20 years later. Will she make this year’s Olympic team?

Check your local listings for a special Snow White and The Huntsman preview on this weekend’s episode of Entertainment Tonight. Then on Memorial Day, Monday May 28 2012, get the latest news and headlines direct from Hollywood. Next week, the show is putting together the best previews and highlights from the upcoming movies that are expected to be huge summer blockbusters. Will your favorite make the list?