She was just announced as a new judge last week, and already she’s sparking drama for The X Factor. Britney Spears is making headlines. The new judge reportedly stormed out of her first audition taping.

Is $15 million not enough for the singer to get along with fellow newcomer Demi Lovato? Or was an X Factor hopeful’s butchering of Britney’s song “Hold It Against Me” the real reason she walked off? 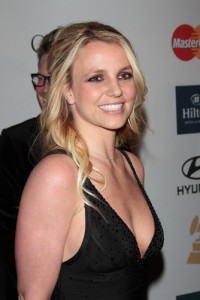 Britney took to Twitter to say she was just taking a break. But there’s also speculation that this could be a ratings stunt, according to Youyoung Lee at The Huffington Post. She implied to Entertainment Tonight that Simon Cowell could be leveraging Britney’s tabloid reputation to boost ratings for The X Factor after its underwhelming first season ratings.

“He knows that any press is good press for his show,” Youyoung Lee said of Cowell. The X Factor auditions are heading next to Kansas City in early June 2012; season 2 airs this fall on Fox.

Adam Levine is a relative newcomer to the celebrity reality show judges’ club. I don’t know if they all hang out offscreen, but he had some words of advice to share with Britney Spears.

His recent second season on The Voice was a ratings success this spring, and the band is releasing a new album, Overexposed, June 26 2012.

Maroon 5’s new “Payphone” video is a chart topper on iTunes, and Adam Levine said that the Internet has been a game changer for their success through the years. The band plays cops and robbers in the song’s music video.

“It was a lot of struggle,” Maroon 5 guitarist James Valentine said of the band’s long road to success. Along the way, they’ve earned three Grammy Awards and sold over 17 million albums.

The band is heading to Spain to kick off an international summer tour on June 1 2012.

Superstar Beyonce is garing up for her next concert tour, four months after becoming a new mom. She’s already got her post-baby body back, and she shared some intimate behind the scenes rehearsal video on her personal website.

Beyonce is kicking off a four-night engagement of live shows this weekend in Atlantic City, New Jersey.

Duets Vs So You Think You Can Dance

In the first night of summer TV, Kelly Clarkson’s new series Duets came out on top in direct competition with Fox’s summer stalwart So You Think You Can Dance, winning by about half a million viewers.

Twilight’s Robert Pattinson is making headlines at the Cannes Film Festival for his new movie, Cosmopolis. He and Twilight co-star Kristen Stewart are now dating offscreen and recently vacationed together in Paris.

Nicole Kidman is stealing some headlines herself for her oversexed role in The Paperboy, juggling romances with Matthew McConaughey and Zac Efron in the film.

Heidi Klum’s see-through Marchesa frock grabbed eyeballs on the red carpet as well at the AMFAR fundraiser in Hollywood this week.

It’s a little early for Oscar season, but the Academy of Motion Picture Arts and Sciences is keeping a full social calendar, kicking off outdoor summer screenings of classic films like Disney’s Snow White, Dreamgirls, and more. Tickets are just $5, and attendees can see films al fresco on the outdoor screen.

Kelly Preston told Entertainment Tonight how she got her figure back at age 49, losing 40 pounds thanks to friend Kirstey Alley’s Organic Liason Products.

Her children with John Travolta are Ella, age 12, and Ben, a toddler. Kelly was tight-lipped about her husband’s massage scandal, which is making tabloid headlines. But she did say that daughter Ella has been bitten by the acting bug, but it’s too early to tell what Ben’s aspirations might be.