Memorial Day is an American holiday honoring the sacrifices of those who serve, and it’s a special day for CSI: New York’s Gary Sinise and the Gary Sinise Foundation. He performs for the troops with his band, The Lieutenant Dan Band, named for the character he played in the classic film Forrest Gump. 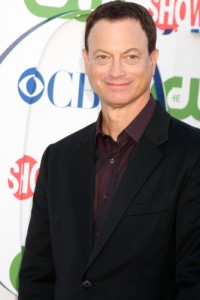 He recently shared some of his home movies with ET’s Chris Jacobs. CSI: New York and ET are shot at the same studio lot, but Gary is no stranger to long trips. He took a 36-hour flight almost 9,000 miles to Camp Buehring in Kuwait. While there, he got to entertain some of America’s troops.

“It’s fantastic. We roll in, we give everybody a good time. I see a lot of smiling faces out there,” he said of the performances.

While there, he toured the Kuwait-Iraq border, and even performed The Who’s “Baba O’Reilly,” which serves as the CSI: New York theme song. His Gary Sinise Foundation provides support for America’s troops, and you can find out more or get involved at garysinisefoundation.org.

New episodes of CSI: New York will resume this fall on CBS.

With the 2012 London Summer Olympics on the horizon, a swimming star is opening up about her surprising struggles with body image. Despite her agility and 12 Olympic medals, Dara Torres often struggled to make weight and developed Bulimia.

She kept her eating disorder a secret for five years, including during her competitions in the 1988 Olympics. Back then, she would purge five times a day, in between intense calorie burning training sessions.

Now she’s sharing her story, blaming low self esteem and negative body image for the eating disorder she’s now overcome. Dara is 45, and these days she swims, works out at the gym, and hopes to set a positive example for her 6-year-old daughter.

Dara feels she has better metabolism these days, and is more comfortable than ever with her body. Dara is trying out again for this year’s Olympic team, and you’ll see who made the cut this August in London.