Fabio Viviani cooked a special veggie burger just for Ellen. It’s really called the Ellen veggie burger and it looks delicious. Make no mistake, I’m a meat eater, but this is a veggie burger I could chow down.

Fabio started cooking at the age of five. It’s a funny story and ends with setting grandma on fire. Well, grandma survived and rescued young Fabio from his life of fire. They taught him to use fire for good and for making good food. 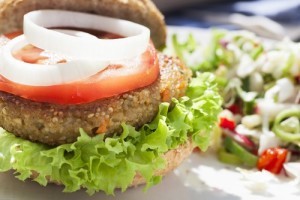 Fabio Viviani made a special veggie burger named after Ellen.

This is such a simple recipe and Fabio said it’s full of flavor. He promises that these veggie burger patties will stick together with the consistency of meat, but are 100 percent meatless.

First, heat the oil in a skillet on medium heat. Add in the onions and mushrooms, cook for five minutes then add garlic, coriander and cumin. Cook this until the onion is browned. You can use water to deglaze the pan if you want. Put this in a food processor with beans and parsley. Pulse until well combined. Add in oil while pulsing until it becomes moldable. Add in salt and pepper to taste.

Mold the patties into burgers and place them on a sheet tray in the oven with the broiler on medium-high heat. Leave in the broiler until lightly brown, then flip and brown the other side. Once done, you can garnish your burger with all of your desired fixings!

Ellen: Bruno Mars “When I Was Your Man”

Bruno Mars performed his song “When I Was Your Man.” This is my favorite Bruno Mars song. It’s not like a sad, Taylor Swift break up song. It’s a song about being an inattentive boyfriend to a strong, smart woman. I feel like very rarely do we hear a man sing about a woman like that.

Last month Ellen gave her viewer Bianca a $10,000 shopping spree to JCPenney’s Joe Fresh pop up shop. She was the first person to shop the line. Bianca didn’t hold back and bought whatever she wanted, and she only spent $200. She plans to split the rest with her roommate and donate some to a charity she worked with.