Ellen had a lot going on today, with guests Jennifer Love Hewitt and Cheryl Hines bringing lots of laughter to the set. Plus, Beck performed his new song “Blue Moon” off his album Morning Phase, and Ellen checked in with a woman who she surprised last January with a brand new house. 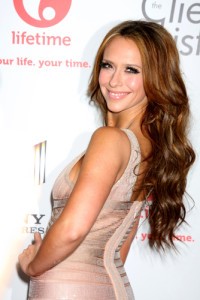 Ellen said she was very excited for Beck to perform on the show. She called him “one of the most respected musicians of his generation.” She said his new album Morning Phase is incredible. This was Beck’s daytime television debut. I was surprised to hear that, considering that Beck has been making music for a while.

For this song, he was dressed quirkily, with a wide-brimmed fedora, black peacoat over a thin-stripped blue and white shirt, and dark blue jeans. One of the musicians in his band played their guitar sideways, with the strap resting across his shoulders so the guitar was faced-up. The band also included two other guitars besides Beck’s own, a mandolin, and a drum set.

The song had a very old school feel, a lot different than his rocky, loose, self-destructive-sounding “Loser” days. It sounded like the perfect song to listen to on a night ride by the beach, or a long, leisurely walk down the street. It’s a reflective song, recalling the old school folk revival days of the ’60s and ’70s.

What did you think of his daytime television debut? How do you like the new song?

Ellen started her April Fool’s Day episode with a prank. She came out in a neck brace, making her fans worry, but it was all for the sake of the day. Plus, Ellen’s underwear was featured in a Trojan commercial. Find out the story below.

Ellen checked in on a woman who Ellen surprised last January with a brand new house they’re building from scratch. The woman talked about going furniture shopping with Anthony Carrino, star of Kitchen Cousins, and told Ellen how thankful she was for the opportunities Ellen’s given her.

Jennifer Love Hewitt stopped by Ellen to talk about her new baby, Autumn, and her new maternity clothing line. Plus, they played a tablet game called Heads Up.

Cheryl Hines played a prank on Ellen today, and talked about her nightmare naked scene on Suburgatory. Plus, Ellen had a sneaky prank for Cheryl Hines, too.