Home > Ellen DeGeneres Show > Ellen Products
When you buy through our links, we may earn an affiliate commission. As an Amazon Associate we earn from qualifying purchases. Learn more.

As they discussed, Ellen DeGeneres and Sofia Vergara are both promoting Cover Girl cosmetics in a new commercial campaign. Read about the Cover Girl Commercial Shoot.

Today they used the company’s products in a silly game, so at least they’re making an effort to incorporate the product placement into the tone of Ellen’s show, instead of just shoehorning it in somehow. 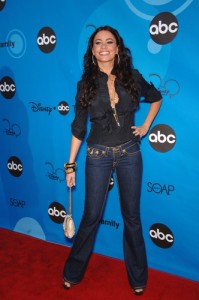 To promote CoverGirl, Ellen put makeup on Sofia Vergara from behind her back. You do not want Ellen to do your makeup. (Image Credit: Featureflash / Shutterstock.com)

Both women praised the combination of CoverGirl makeup and Olay hydrating serum in this new product, presented by two established companies.

Sofia Vergara put on a large kimono. Ellen stood behind her, using her arms to put makeup on Sofia’s face without being able to see what she was doing.

“Don’t tickle me,” Sofia said before Ellen got started. Ellen explained that she wrote some surprise dialogue for Sofia Vergara to recite while Ellen is applying her makeup blind.

It was truly creepy to see this unfold, with Ellen’s head completely hidden behind Sofia’s body. You could only see Ellen’s hands, and as Sofia talked about getting her body ready and her face being asleep, Ellen touched and primped the actress before splashing water in her face.

Next Ellen tried to apply the CoverGirl foundation as Sophia explained its benefits, including improving skin tone over time. It can also cover wrinkles and discoloration lines, she said as Ellen smeared it on her face.

As Sofia continued to read the silly sentences Ellen put together for her, the talk show host did disco moves and got so much makeup smeared on Sofia’s face that she could only see out of one eye to read the Teleprompter.

Next, Ellen attempted to apply eyeshadow and other makeup to Sofia’s face, neck, and even chest. Last was lipstick, which of course made a smeared, streaky mess all over Sofia Vergara’s face.

Sofia Vergara was starting to look like an amateur drag queen with a toddler for a beauty consultant. It was certainly a sight to see, and while the audience was entertained, I’m not sure how convincing a sales pitch this is for their Cover Girl products.