As the 2012 presidential race heats up, it’s stunning to realize the new ways in which television is becoming part of the campaign. Just last week, President Barack Obama visited Late Night With Jimmy Fallon. His wife, Michelle Obama, has been called the most televised First Lady in history.

Though TV and presidential campaigns have gone hand in hand for decades, this modern era of politicians and candidates rubbing elbows with movie stars and visiting entertainment shows can be traced back to one defining moment: President Bill Clinton playing the saxophone on The Arsenio Hall Show. 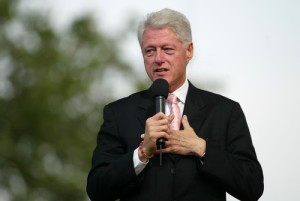 It’s fitting, then, that the former president is getting back out there in the media circus he helped to create by opening the door. President Bill Clinton will sit down to catch up with Ellen DeGeneres on May 3 2012, and it’s his first visit to her show in six years.

That means he hasn’t been back since his daughter, NBC News correspondent Chelsea Clinton, got married, or since his wife took on her challenging gig as Secretary of State. We’ll see what Bill Clinton has on his mind these days, though I won’t hold my breath for another saxophone solo.

Set your DVR now for this exciting interview, or check Recapo to get the full scoop after the show.

Ellen has been on a season of giving, doling out cars, home makeovers, and even a new house. Coming up on the May 3 2012 episode, she is returning to Whitney Elementary School to surprise the students there with one more big gift.

Check out the new library the students will get to use at their school, thanks to Ellen and her friends. It’s being unveiled on the next show, and if you like seeing people jump for joy, you won’t want to miss it.

Ellen has helped out a few schools throughout this year, but it seems like Whitney Elementary School might hold a special place in her heart. From former presidents to real people, there’s always something fascinating or entertaining happening on Ellen’s stage.