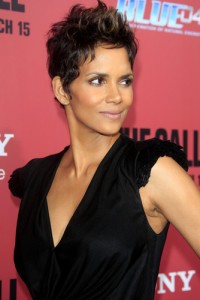 On March 13 2013, Ellen and Halle Berry face fears and talk about serial killers in her new movie The Call. (Helga Esteb / Shutterstock.com)

Get excited for fun with Ellen and Halle Berry on March 13 2013. Last time Halle was on the show, Ellen tried to help her conquer her fears. How has Halle’s progress been so far? Ellen checks in. Don’t forget, Ellen’s heading to Australia next week! She’s getting ready and asking for more advice. If you’re lucky, maybe she’ll throw you a ticket!

One of the most stunning women in the world, Halle Berry, is telling Ellen about her life. She’s got updates on her adorable daughter and how she keeps looking so fresh. Halle’s style shone on the red carpet at the Oscars in a metallic striped dress by Marchesa. She said she wanted to look like a Bond girl for the special James Bond tribute. She played Giacinta “Jinx” Johnson in 2002 in Die Another Day.

The last time Halle came to Ellen, Ellen scared her silly. She said she is so afraid of spiders she can’t even look at them. Now she’s so scared she’s sweating on Ellen’s couch.

In her new film, The Call, Halle plays Jordan Turner. Turner is a 911 operator that gets a call from a girl that has been abducted, played by Abigail Breslin. Halle’s character must deal with a killer from her own past to rescue Breslin. She has to talk the serial killer out of killing Breslin and attempt to solve the mystery of a serial killer.

There are just a few days until Ellen hops on a Qantas jet for Australia. She’s been gearing up for months and can’t wait to get there. She’s given away tickets daily and asked her viewers to send in videos of “koala-ing.” Ellen can’t get enough Aussie tips and tricks. She’s excited to see the animals and her Australian viewers. She even wants an Australian Underwear Model to join forces with Gluteus Mikesimus.