From her beginnings in The Godfather to more recent roles in favorites like Mad Money, Diane Keaton is one of America’s best loved, most enduring actresses. Last year, she released her memoir. Now she’s back on the big screen starring opposite Kevin Kline.

Her newest movie is called Darling Companion, and she will be telling Ellen all about it, coming up on April 30 2012. You won’t want to miss these two beautiful blonde ladies chatting about Hollywood, comedy, and fashion, among other topics. 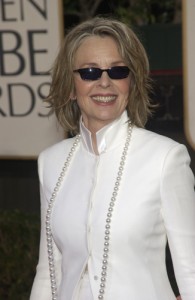 Diane Keaton is one of those people who’s simply unhateable, and she’s sure to bring the charm for her sit-down with Ellen. It will be a fun way to kick off the week, and you won’t want to miss it. Set the DVR right now. If you can’t see the show, be certain to bookmark Recapo and check back for the full details on her appearance and much more from the next new episode of Ellen.

As the couples dwindle in numbers (can you believe Gladys Knight got the boot, and during Motown Week?), the competition is heating up on Dancing With The Stars. Recently, Ellen got the inside scoop from Derek Hough and Maria Menounos.

Coming up on her Monday April 30 2012 show, Ellen is welcoming another couple from the popular reality competition. NFL star Donald Driver has spent the spring dancing with Peeta Murgatroyd, and they’ll be showing off some of their best moves for Ellen. You know that’s going to be fun.

Ellen loves surprises, and as she gets ready to wrap up this season of her talk show, you know there are going to be a lot more in store over the next few weeks. Don’t miss out on some of the biggest reveals of the season.

She’s getting off to a great start on Monday April 30 2012 with a surprise ambush makeover for a deserving family. Be sure to tune in and see their unfiltered joy when Ellen gives them the surprise of a lifetime. That and more on the next all new Ellen Show.