Recapo Update: This episode of Ellen has aired…

Ellen isn’t begging her producers for summer vacation anytime soon. She would keep going all summer if they would let her. In this all-new episode of Ellen, the star of The Internship, Owen Wilson stops by. Also, Good Luck Charlie’s Bridgit Mendler is in the house performing her new single “Hurricane” from her debut album Hello My Name Is… Get out the sunscreen and lemonade, because it’s summertime on Ellen. 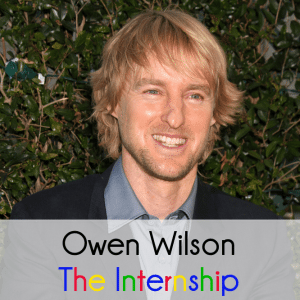 On June 5 2013, Ellen brings the laughs with Owen Wilson from The Internship and the musical stylings of Disney Channel star Bridgit Mendler. (Helga Esteb / Shutterstock.com)

In his new film, Owen Wilson teams up with Vince Vaughn to join a giant corporation. Wedding—no, Google Crashers—sorry, I mean The Internship, is about two older guys that find themselves out of work and going back to the bottom to do something they are interested in. What could go wrong? Google is the ultimate job and looks like a blast of a workplace. The only thing they’ll find difficult is keeping up with the younger generation who know technology.

Owen Wilson and Ellen take a break from the mundane promotions and play a round of Ellen’s app Heads Up! This time, it’s all movies. Ellen gives him clues like, “You were in this movie with Ben Stiller.” The possible combinations for that are: The Royal Tenenbaums, Zoolander, Starsky & Hutch, Meet the Parents, Meet the Fockers, Little Fockers, Night at the Museum, Night at the Museum 2, The Cable Guy, Permanent Midnight, and The Big Year.

For the record, she was looking for Night at the Museum.

One of Disney’s most prized possessions, Bridgit Mendler is ready to spread her wings and fly away from the Mouse. She’s been acting on Good Luck, Charlie for years, but it looks like the series might be ending. As her back up plan, Mendler has turned to music. She’s performing her new single off Hello My Name Is…, “Hurricane,” on June 5.