Ellen DeGeneres welcomed the Academy Award-winning actor as well as rock star Jared Leto. Jared said it was so nice to hear “Oscar winner” because it was such an amazing time for him.

Ellen said his band’s song “Do Or Die” already has 11 million views on YouTube and she can’t wait for everyone to hear the band, 30 Seconds To Mars, perform it. Jared said he actually has his clothes on, which is interesting, and said he’s not auditioning for Magic Mike. Ellen joked that she could make a phone call. 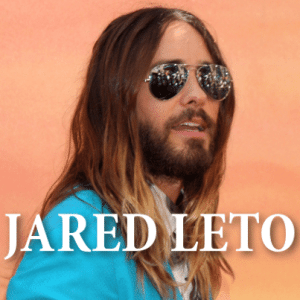 Ellen sat down with Jared Leto to talk about how he spent his summer, as well as his band 30 Seconds to Mars, who performed their hit song “Do Or Die.” (Helga Esteb / Shutterstock.com)

He also showed a picture of him jumping off a cliff into the water.

Ellen also shared a picture of him walking on the beach with socks on and carrying a suitcase. He even rocked a fanny pack at one point.

Ellen said next time he goes to the beach, he can sport an Ellen fanny pack and a giant Ellen tote. He said he felt like he was ready for the beach, and he certainly looked like he was!

Ellen: 30 Seconds To Mars “Do Or Die” Performance

Jared Leto then performed with his band 30 Second To Mars, their hit song “Do Or Die.”

During the performance, Jared Leto bounced around waving a white flag covered in words like peace, war, and the name of their album, Love, Lust, Faith and Dreams.

Jared Leto then invited Ellen’ audience to come down and jump and dance with him, while white confetti rained down on them. I can’t remember the last performance on Ellen that was that cool to watch. The audience involvement, white confetti, and enthusiasm of Jared Leto made for a truly memorable show.