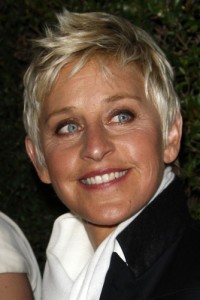 Gwen Stefani and the rest of No Doubt played “Spiderwebs” for the Ellen audience. (Helga Esteb / Shutterstock.com)

Then, it was another awesome surprise for the Ellen audience. No Doubt haven’t played together in eleven years, so Ellen decided, why wait any longer? No Doubt came out and performed one of their best old songs, “Spiderwebs.” Don’t worry– after over a decade, they haven’t lost their touch!

After they performed, Ellen pointed out what great shape Gwen Stefani is in. “And no matter where I was standing, her belly button followed me,” Ellen said. “It was weird!”

Also, a Tuesday show means one of Ellen’s best new segments: Classic Joke Tuesday! This time, the joke had an aquatic theme:

Q: What lies on the bottom of the ocean and shakes? A: A nervous wreck!

The Ellen Streaker strikes again! This Past April, a man named Mark Harvey went streaking in a baseball stadium wearing a Batman cape. When asked why he chose Batman, Mark responded that he didn’t have a pair of Ellen underwear.

Well, Ellen took care of that problem, and sent a special Ellen cape and underwear Mark’s way. Just recently, Mark was at it again, this time at a Baltimore Ravens football game. This time, Mark wore the outfit that Ellen had sent him, and wrote “Don’t Be a Bully” on his chest. At least he’s promoting kindness!

Ellen emphasized that she does not condone breaking the law; however, if you are going to do it, you might as well do it in style. She sent Mark a brand new striped Ellen cape and underwear for his next adventure.