The 2012 Grammy Winners for Best New Artist, Bon Iver, visited Ellen DeGeneres today for a performance of their song “Towers.” 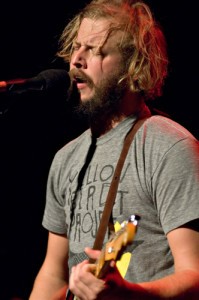 “Towers” is one of the ten tracks written by Bon Iver frontman Justin Vernon that have been resonating with listeners. In an interesting tactic, the song titles for the albums are all representative of places, and the composition of each song is meant to evoke that place.

From humble beginnings in Wisconsin in 2007 to a smash self-titled breakthrough album in just four years is a remarkable musical journey and a true American success story.

The band’s name comes from a French phrase that loosely translates to “Have a good winter.” Since first collaborating in 2007, the band independently released a 2008 album which garnered plenty of indie buzz, despite the fact that it had been intended to be released as demos in hopes of getting the band label attention.

The strategy worked in one way or another, and after a few years of experience and live performances, they honed their songs, style, and sound to produce the popular 2011 album Bon Iver.

Response to the album’s summer 2011 release was almost uniformly positive. The band won fans among critics and the public, getting recognition from Paste, Pitchfork, and other industry standard bearers for their unique perspective and contribution to the music scene.

Their work and success were recognized again by the music community with four Grammy nominations: Song of the Year, Record of the Year, Best Alternative Music Album and Best New Artist.

Of course, fans and critics alike are curious to see what’s next for the band. But in the meantime they should be able to ride the wave of their current success until they’re ready to unleash some new material on the world.