Ellen met Georgia Perry for the first time ever when she was visiting a classroom at Portia de Rossi’s old school on her trip to Australia. Ellen said a young girl, a friend of Perry’s, came up to her and said, “my friend can really sing.” Ellen admittedly was thinking the young girl just wanted to get her friend on TV but after Ellen heard the young girl sing, she knew Perry needed to be flown to America to perform. 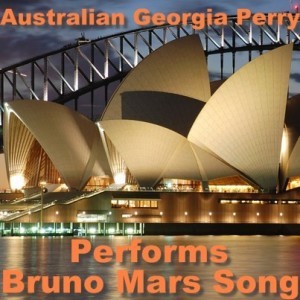 Ellen watched as Australian singer Georgia Perry performed “Count On Me” by Bruno Mars and learned she has never performed in front of people before.
(Image Credit: Jan Kratochvila / Shutterstock.com)

The most interesting part about Georgia Perry’s amazing voice is that not many people have heard it. She has never been in a competition, she has never been on TV before and she has never sang in front of an audience. At least that was the case before Ellen came around.

Ellen was also impressed with how calm Perry looked when she performed in front of thousands of people in Australia. She must have been good at hiding her nervousness, because Perry said she was really nervous getting on stage.

“I hid it under my dress,” she told Ellen.

Georgia Perry Performs “Count On Me” By Bruno Mars

“This is literally a girl I met in class and said come to my show and sing on my show,” said Ellen before the singing started.

After the performance, which was amazing and can be seen in the video below, Ellen gave Perry a huge basket full of American stuff to bring back to her friends. The gift basket included a bunch of American dollars, some American key chains and other knick knacks to bring Down Under.