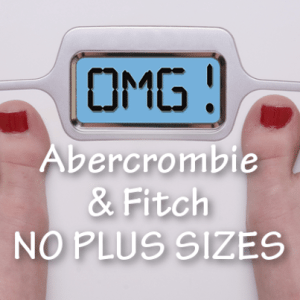 Ellen thinks that the sizing at Abercrombie & Fitch is ridiculous. She said that beauty is not a number and isn’t physical. Beauty is on the inside.

Ellen was particularly outraged by the recent comments made by Abercrombie & Fitch CEO Mark Jeffries.

“According to him, anyone who is a plus size isn’t cool enough to shop in Abercrombie & Fitch,” Ellen said. “You know what I say to that? Oh, Fitch please.”

Ellen asked when someone decided that over a size ten was plus size. She has noticed a major trend in women’s clothing towards smaller and smaller sizes.

“Honey, do these jeans make my butt look invisible?” Ellen asked what was up with the size double zero.

“Beauty is not between a size zero and a size eight,” Ellen said. “It is not a number at all. It is not physical… what you look like on the outside is not what makes you cool at all. I wore a mullet and parachute pants for a long time and I’m OK.”

Ellen said that being healthy and happy is the most important thing. You can get any size you want from the Ellen shop and you can shop it 24 hours a day, Ellen encouraged.

Amy, Ellen’s writer that is up for anything, likes to go to places and say song lyrics to people. Today, Amy hit the jack pot at 24 Hour Fitness in Los Angeles. She got several people with Queen’s “Somebody to Love” and Olivia Newton John’s “Physical.” One guy took physical so far that he started hitting on Amy and asking to “hear her body talk.” Then, people at the gym really thought she was looking for a relationship and started giving her advice and trying to cheer her up.

A Vine video can only be six seconds long. That’s six seconds to get really creative and it can be hard. Some people are just gifted with Vine talents. Ellen showed off her favorite Vines. Up first, a guy asked, “Why is everybody afraid of love?” He then shouted “LOVE” behind a woman shopping, making her scream. Perfect. Simple. Vine. Next, a cat decided it was afraid of a banana peel. It gingerly swiped the peel off the table, but towards itself. The cat appeared to have dissolved in midair. Then, a dog liked to “move it, move it.” As soon at the song came on, the puppy began to wiggle itself around the the beat. Another creative Vine was two guys do “the human chainsaw.” It would have worked perfectly, had the second guy not walked out behind the tree after knocking down the branch. Ellen’s favorite was women’s arm wrestling. One female arm wrestler was so intense, she began screaming and making primal faces to help her strength. She lost, but I believe we won.