Ellen: What Happened To the Seasons?

Do you remember the seasons? It seems like the entire country is facing crazy weather. There is snow on some people’s driveways and Ellen is sweating herself to death in California. On May 14 2013, Ellen decided to make light of some of our heat-related issues.

Ellen said the worst thing about the heat is getting in a hot car. You scald your thighs on pleather and burn your hands on the steering wheel. Buckling your seatbelt? Forget about it. Ellen said she burned her finger prints off this morning getting in her car.

“The good thing is that now I can rob banks,” she said.

She said it’s a one day policy of no shirt, no pants, no problem – you just have to dance first.

Surprise! It’s Keith Urban sharing his classic joke this Tuesday. He said he was at the American Idol studio, but he was actually backstage.

“What do you call someone with no body and no nose?” “Nobody knows.” 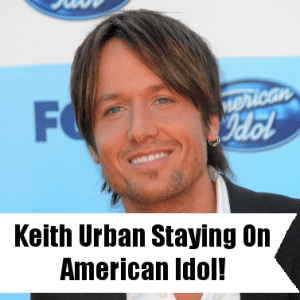 Ellen’s friend Keith Urban stopped by to share a classic joke and to reveal his new job. He’ll be staying on Idol when the rest of the panel leaves. (image credit: s_bukley / Shutterstock.com)

While it’s been buzzed about all week that all four judges are leaving, Keith Urban announced that he is staying on American Idol! He will take Randy Jackson’s spot on the panel next season. This is so good for Idol because Keith is such a constructive panelist and a really great mentor. I’m jazzed they are keeping him around.

As for who will go home a winner this season, Keith said that all of the remaining girls are strong and will have careers in the music business.

Keith Urban is working on his new album and just released a single, “Little Bit of Everything.” He performed a little bit with just clapping the beat. His voice is so fantastic. Can you believe that this amazing man is married to the just as fantastic Nicole Kidman?

“I know the words to so many songs,” he said. “But I have no clue where my car keys are.”

So You Think You Can Dance Premieres On Fox

Ellen is a huge fan of So You Think You Can Dance, which premieres May 14 on Fox. She invited some of the best dancers from the last nine seasons to dance for her and Keith Urban. Of course, then she got out and did a little shuffle with them.