Recently, Ellen DeGeneres Found A Rattlesnake on her farm. She had a Snake Expert visit the show to give advice on how to humanely deal with snakes. Now Ellen has made another unexpected discovery. They found what used to be a fountain on the property, and Ellen was hoping she would find a penny worth $1 million, like one lucky person recently did.

Ellen said she always checks to see what’s in this fountain area in case an animal is stuck. That is where she recently found another snake. It was a small, skinny garden snake, and she claimed to know it wasn’t dangerous. 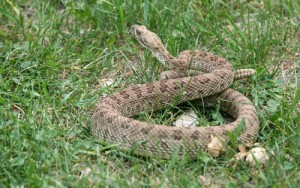 Even after a visit from a professional snake wrangler, Ellen is still finding unwanted guests at her farm.

As she tried to pick it up, it began to slither away, which freaked her out. Then it disappeared into a tiny space between a light fixture and a wall. Ellen and a friend dismantled the light to discover the snake, and she said that’s where they found an old present Ellen had hidden for Portia.

Not really. Instead, they found the small snake and another giant snake. “That’s when I started to feel like Samuel L. Jackson,” Ellen said. “I was like, ‘We’ve got to get these mother-bleeping snakes out of this mother-bleeping light fixture.’”

Ellen eventually called Bo The Snake Wrangler to help her out once again. She said she loves having nature around her, and she can’t decide whether the message is that we should co-exist with others, or that we’re all going to eventually be eaten by snakes.

DJ Tony recently starred in and produced a movie called Restless City, which was recently at the Sundance Film Festival, is now coming to theaters.

According to DJ Tony, you can see it in theaters in New York, Los Angeles, and Atlanta starting April 27 2012. He and Ellen discussed that there is no nudity in the film, though he does go shirtless.

The film will roll out to additional cities in the following weeks. For more information, visit restlesscityfilm.com.

Remember that game show, Don’t Forget The Lyrics? DJ Tony would’ve been a terrible contestant. Today, Ellen did another installment of DJ Tony Karaoke. Here are his butchered lyrics from today’s show.

His excuse is that he knows the beats, not the lyrics. First up was “Best of My Love” by The Emotions, which Ellen noted Tony has played more than 30 times on the show.

Ellen challenged him to a more current song, “Moves Like Jagger” by Maroon 5.

That is amazingly bad. None of those words were right, except the name of the song.

“Do you drink before the show?” Ellen wondered. “I think you do.” Apparently, DJ Tony doesn’t drink at all, which Ellen said is why they don’t hang out.

Ellen: Drinking On The Job

Ellen said new research has found that drinking on the job makes employees work better. She said the University of Illinois – Chicago did this research, and Ellen is taking it to heart. She pulled out a drink inside a pineapple with a crazy straw.

She praised her show’s staff, and gave a shout out to everyone on staff for Administrative Assistants Day. She gave the dozens of show assistants their moment onstage. Then Ellen made up names for all the staffers who help put together the show, as their real names flashed on the screen.

Ellen Dance Song: “You Got The Power”

Today’s audience dance song was War’s “You Got The Power.”

Download an MP3 of “You Got The Power” by War.