Ellen DeGeneres sent one of her viewers, Ali Shields, as an Ellen correspondent at the red carpet for last weekend’s Academy of Country Music Awards in Las Vegas.

She hit on Luke Bryan, explaining that she makes cupcakes by day when she’s not reporting for Ellen. She even got Luke to help her frost a cupcake, which isn’t as dirty as it sounds.

One of the members of Lady Antebellum remembered meeting and kissing Ali during her last red carpet assignment for Ellen. Then the group did an impromptu rap about Ellen. 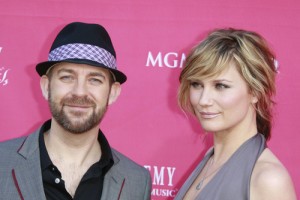 Kristian Busch & Jennifer Nettles of Sugarland were among the stars on the red carpet at the ACMs. (Image Credit: Joe Seer / Shutterstock.com)

Ali met Dierks Bentley, and she was starstruck, admitting she was getting nervous. “I can’t even think. You’re too good looking,” she told him.

Keith Urban and Nicole Kidman were there. What do you think she remembers about being married to Tom Cruise? Nicole was excited to find out about Ali’s cupcakes.

She also gave Rascal Flatts some cupcakes, and one of their members claimed to be wearing the Ellen Underwear.

LL Cool J was among the long list of people Ali couldn’t help hitting on.

Of course Taylor Swift took a minute to chat with Ali, giving a shout out to Ellen for always keeping things entertaining. Ali thanked Ellen for sending her to the show.

After the segment, Ali was in the studio audience. Ellen recalled that she’d never been kissed before her first red carpet assignment. Now she’s a lot more bold, Ellen observed. “I didn’t get it in high school, and now I’m all crazed,” she said.

Ellen DeGeneres checked in with DJ Tony after their week off for Spring Break. Ellen asked how he was enjoying the present she got him.

DJ Tony’s poor parallel parking skills have been the subject of ongoing analysis on Ellen’s show, and she showed the pictures from recent weeks, where Tony couldn’t park between the lines.

To correct this problem, Ellen actually had his spot repainted, so he has more room to park his car.

As the audience danced to Gwen Stefani’s “Hollaback Girl” before the show, Ellen’s cameras caught Ron, a stagehand, getting into the dancing spirit with the audience.

Ellen: What’s Wrong With These Signs

Ellen: Producer Andy Gets The Giggles

That’s pretty good, but it’s not as funny as Ellen’s producer Andy seemed to think. Ellen likes to make him uncomfortable, and he gets the giggles.

Ellen asked Andy to repeat what the sign said, but he couldn’t get any farther than the word “penis” without laughing uncontrollably. Eventually he managed to say “penis finger,” but that was as far as he could get without gasping for air and laughing. Maybe she’ll revive that segment where she makes him say silly things.