From simple indie band to two Grammy nominations and a hit single, The Lumineers might be one of the biggest success stories of the last year. The came to Ellen the day after the Grammys to perform their hit single “Ho Hey.” 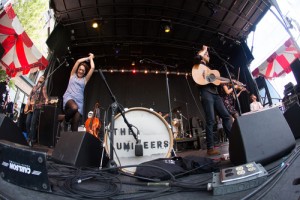 The thing I like best about the Lumineers is that you get pure talent when they perform. There are no gimmicks or dancers or lights, just people with instruments in front of mics. The same is true for their album, The Lumineers. It’s a fun and simple indie album with a pure feel. I love their tracks “Flapper Girl,” “Flowers In Your Hair,” and “Classy Girls.” This is the album you put on when you just want to chill out and unwind.

If you’re thinking of trying The Lumineers, they are comparable to Of Monsters And Men, Fun. and Mumford & Sons. Basically mash those three bands into one and you have The Lumineers.

Ellen: Kick In The Kindness Week

Sponsored by the people at Shutterfly, Kick In The Kindness Week is all about putting smiles on families faces. So far, Shutterfly has given away over $300,000 to change people’s lives.

Today Ellen helped the Rowan family. Tiffany Rowan and her husband lost their jobs in 2005. They lost their home, cars, savings and their lives snowballed into uncertainty. They had a lot of help and Ellen gave her seven $1,000 J.C. Penney gift cards to help thank those families.

The Rowan family wanted to help out their friend who was sick and buy them groceries, but they couldn’t afford groceries for themselves. Shutterfly wanted to help them out so they gave them two big bags of groceries and another bag filled with $20,000! Ellen promised that things would get better for the family.