Deep breath. In and out. There are few things that I love more in this world than “Lego House” by Ed Sheeran. Maybe “Wake Me Up” by Ed Sheeran. Had he performed that song, I would not have been able to continue writing this.

“Lego House” really launched Ed Sheeran’s career in the states. He was pretty popular in Europe, but after making pals with One Direction and Taylor Swift, Sheeran really broke into the U.S. music scene.

Sheeran is currently on tour with Swift and is not, I repeat, not dating her. I’m pretty sure he wouldn’t lie about just being friends with T.Swift. He’s working on a follow up to his amazing album, +, and just being awesome. 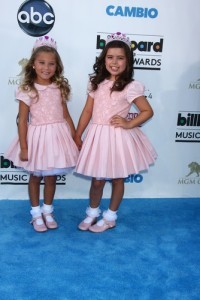 Ellen sent her little princess cohorts to the Billboard Music Awards in Las Vegas. They were the belles of the ball, or at least the red carpet where they munched on gum balls. Hayden Panettierre stopped by and they stuffed their faces with sugar. The girls handed out sunglasses to Psy Oppa and danced to “Gangnam Style.” Akon played roulette and had to give the girls hugs. Nicki Minaj stopped by and scared the girls with her massive cleavage. Also Miley Cyrus lamented over not having a fake ID when Sophia Grace and Rosie do.

This is the last time we’ll see Sophia Grace and Rosie until the fall. While I try to hold back my tears, Ellen presented the girls with a summer surprise. Sophia Grace once asked Ellen for a pool, but this is so much better. It’s a giant “Sophia Grace & Rosie” summer playhouse and water slide. The girls will be hanging by the beach all summer. And I’ll be tweeting them, asking to come over and hang poolside.