No Doubt: Together for 26 Years

No Doubt are reunited after eleven years apart, which feels like almost an eternity. But do you know what feels even longer? If you can believe it, the band have been together for 26 years! It all started back in 1986 in Anaheim, California, where they used to play in garages as teenagers. Gwen Stefani, Tony Kanal, Adrian Young, and Tom Dumont all got together to join Ellen where they discussed their past, their present, and their future as a band. 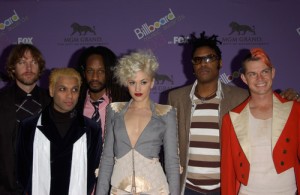 Ellen told No Doubt that they all look fantastic, considering they’ve been together for such a long time. “And I still like you!” Gwen told her bandmates. “What’s amazing is that we’ve gotten to be a garage band together, then a band traveling the world together, no we’re raising our kids together,” said bassist Tony Kanal.

No Doubt: Kids in the Studio

Speaking of kids, all of the No Doubt band members have at least one. Gwen Stefani has two with her husband Gavin Rossdale, Kingston and Zuma. So, does that make it challenging to get back in the studio to record?

Gwen said that because of their families and busy schedules, it was “chaos” trying to get everyone together on the same schedule. They were able to record with sessions three days a week; sometimes kids were there, sometimes they weren’t.

Gwen’s youngest son, Zuma, was actually at the Ellen show with the band. He helped them out with soundcheck, and loves the guitar. Tom said that all of their children have shown an interest in music.

Gwen recently got the chance to hang out with First Lady Michelle Obama with a fundraiser at her house. Gwen said that Mrs. Obama was so gracious, and really took the time to speak with everyone who attended, even in the intense heat. Gwen’s kids were acting out, but Mrs. Obama handled it like a pro!

Finally, the band all got back on stage to perform a brand new song, “Looking Hot,” that hadn’t been heard anywhere else before. “Looking Hot” can be found on No Doubt’s brand new album Push and Shove. The album is out September 25, so pick up your copy for a brand new collection of No Doubt songs. It’s good to have them back!