Ellen: Emeli Sandé “Next To Me”

Emeli Sandé is a British artist breaking onto the American music scene with her single, “Next To Me.” It’s a great song about a strong woman with an equally strong man by her side through good times and bad. The song has over 25 million hits on YouTube. 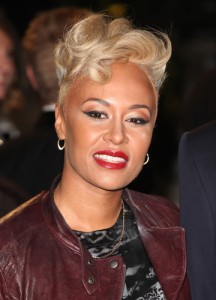 Emeli Sandé performed “Next To Me.” (Featureflash / Shutterstock.com)

Sandé’s look was so cool. She had a cool white blazer with a zig-zagging trim and chrome accents. She wore a black leather skirt and a shiny silver top. The most impressive part about her was her platinum blonde pompadour-mohawk. Let’s just say she works it better than Miley Cyrus.

Her performance on her first album, Our Version Of Events, is amazing. She has strong vocals and lyrics. Live on Ellen, Sandé was even stronger. I liked how she moved her arms around while she sang and connected with the audience that way. The performance with her body really added emotion to her performance.

Going back to the Wodek family, who she’s already gifted over $40,000 to, Ellen had one more surprise. Shutterfly donated another $10,000 to help pay for college for her four children. Wodek had been working three job and still was struggling. The money will help her a lot.

Ellen loves helping others. She showed a footage of her last trip to Australia, where she met the Wilson brothers. They told her that their family was having a hard time after their father was diagnosed with a brain tumor. She was so touched by their story that she flew the brothers to her show in L.A.

After getting to know them more, the boys told Ellen that their father couldn’t work anymore and their mother had taken on the financial role in the family. Ellen and Swiss donated $25,000 to the Wilson’s for bills and other expenses. Their father thanked Ellen and said she was inspirational, kind and true. Their mother was just happy that her sons got to meet Ellen.