Ellen DeGeneres started her show by asking how many of the audience members were single. She said dating can be hard, “especially when you’re married.”

She also said she hasn’t dated in a while, but when she did she always found something wrong with the person. Either they chewed with their mouth open, had a weird laugh, or they were a man. But she said now, thanks to scientists, finding a partner just got a little easier. Scientists have come up with a new way of dating called “scientific match”. Scientists take your DNA to help you find potential partners. 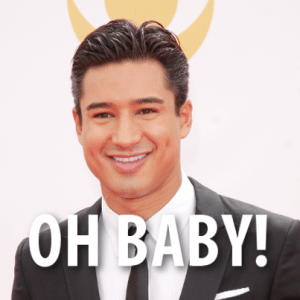 Mario Lopez was Ellen’s guest DJ on June 26 and he shared the details of his new baby. (Featureflash / Shutterstock.com)

You swab the inside of your mouth and send it in, and then they analyze it and two weeks later you get a list of potential matches. “How romantic,” Ellen said.

Mario Lopez was Ellen’s guest DJ. He said he was in his element as a DJ because of his radio show.

He shared that he had a kid since he last saw Ellen. It’s his second child, a boy named Dominic who they call Nico. He’s only two weeks old, so brand new! He didn’t have any pictures to share because he said his wife forbid him from sharing pictures and wanted him to “marinate in life” a little bit first.

While she was dancing, Ellen took one audience member’s purse, and while talking to Mario Lopez, she joked that she had some baby gifts for him inside the purse. She pulled out a scarf saying it was a puppet, a mostly empty water bottle saying she had some water for the baby, and then a pack of cigarettes. She then pulled out her wallet and said “kids love money.”

Mario also shared that he’s going to be hosting the ALMA Awards, which stands for American Latino Media Arts Awards. He will host with Eva Longoria. Before moving on, Ellen reminded Mario he could take his shirt off any time he wanted. “It gets really hot over there,” Ellen joked. She even jokingly put some heat lamps on him, trying to get him to take his shirt off.

Ellen then showed a video of a husky playing in a giant pile of leaves. The dog would disappear into the pile and then run around the yard, only to come right back to the leaves. It was pretty adorable!

She then sent Andy to hide in a pile of leaves on the lot to scare some tour groups as they walked around. He kept yelling “fall’s here!” and throwing leaves into the air, surprising and scaring many tourists.