There has got to be someone who works at The Ellen DeGeneres Show whose full time job is to find funny Internet videos. What does your resume look like if you’re applying for that job?

I guess that’s one position where having lots of experience wasting time on the Internet while at work is actually a skill. I’ve been trying to think of what the downside to that would be, and I can only guess it would be when viral videos come back around that you’ve already seen a dozen times. 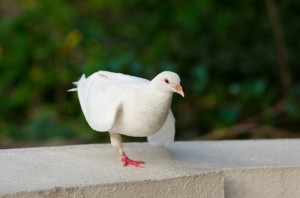 Even Ellen's animal friends are getting in on her Dance Dares, like a bird who snuck up behind a woman.

But today’s videos all seemed new to me, so maybe you’ll find a new one to send to your co-workers from among these gems featured on Ellen.

Ellen managed to find a new way to combine two of her favorite things: Dance Dares and Web Videos of animals.

She found a video of a Cockatoo dancing behind a woman near a lake, which just reminds me of the dancing bear from last week.

Ellen found another web video of a Frog relaxing on a bench. He is just sitting there, ribbeting peacefully.

Ellen had to see what happened when a black and white cat tried to investigate a paper bag. His feline companions were unimpressed with this thirst for exploration.

From the back yard of suburban America came a video where a young man did a flip, then shot a basket from well across the yard. That is more like a 10-pointer than a 3-pointer.

At another lake, found a dangerous seeming activity, in which someone jumps onto an inflatable raft and sends other people careening into the distance. Somehow they managed to land in a far off swimming pool, but that looks like it’s got to hurt and is probably quite risky.