It was April Fool’s Day and Ellen didn’t miss an opportunity to play a prank on the audience. She came out wearing a neck brace. “I’m sure you’re wondering why I’m wearing a neck brace this morning. It’s a crazy story. I was driving to work this morning and all of a sudden out of nowhere, I got hit by the realization this is April Fool’s Day!” she said, as she tore off the brace. 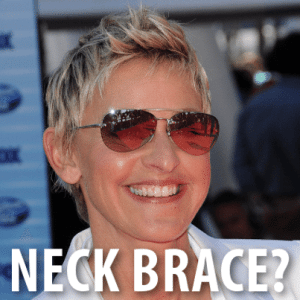 Ellen pranked her audience when she came out with a neck brace for April Fool’s Day. (s_bukley / Shutterstock.com)

According to Ellen, April Fool’s Day originated in France in the 1500s. This is probably not true though, because it’s April Fool’s Day. Ellen kept us in suspense by admitting it was a lie, before saying it was true, before saying again that it was a lie. She also said that New Years Day used to be April 1, but they changed it. Only people in rural areas kept celebrating New Years on April 1, and they were called April fools by everyone else. This fact was again said to be a lie, or the truth. I guess you have to make up your own mind. But whatever you do, don’t be an April fool!

Different countries have different April Fool’s traditions. Ellen said that in Portugal, they throw flour on people. Another weird tradition is taping a paper fish onto someone’s back without the person knowing. Ellen said they do that in France. She said it’s hard for them to take it off, because they’ve got a cigarette in one hand and a croissant in the other, and they’re also trying to keep their beret from flying away in the wind and their poodle in check. “Have you been to France? That’s what they do,” Ellen said.

In Belgium, kids lock their parents out of the house in hide. Ellen said that here in America, we do that on Thanksgiving.

Ellen said that a man pranked her today. He was dressed like a cop and even had the car. He pulled her over for speeding and gave her a $160 ticket. Ellen said she didn’t believe him. Ellen also said that she was injured and couldn’t dance today. But this was of course an April Fool’s joke. What’s the Ellen show without dancing? That’s not a world I want to live in.

Ellen Underwear In A Trojan Ad

Ellen received a letter from a viewer named Amanda. She had seen a commercial for Trojan, and she said there was something in there she’d be interested in. “I doubt it, but let’s take a look,” Ellen said. It turns out the guy in the commercial was wearing Ellen Underwear. It was a quick shot, but Ellen said she was impressed Amanda had seen it.

Because she told Ellen about it, Ellen sent her all of the different varieties of Ellen Underwear in the Ellen store. She also said she was sending some gecko-sized Ellen underwear to Geico, hoping the Geico Gecko would wear it. It even had a hole for the lizard’s tail.

Then it was time for Ellen’s segment Oh, Puh-lice, which had real stories from the police blotter in newspapers viewers sent in. The first one sent in was a domestic disturbance. It said that “police determined the residents had the television turned up loud and were watching Dr. Phil”. Another one was an assault and battery between two women, who were fighting over who had better parenting skills.

The third one was a drunk driver who crashed his vehicle and fled into the woods. Officers found him an hour later 30 feet up in a tree. He asked the officers if they caught the guy who crashed, and then he explained it couldn’t have been him because he’s actually an owl.

Ellen: How Much Money Does The Tooth Fairy Bring?

Ellen’s DJ Twitch was wondering how much money the tooth fairy should give a child. He ended up giving his daughter $4. He said he gave such a small amount because she’s got four or five loose teeth right now, and it all adds up. A new survey says the average price the tooth fairy gives is $5.

But to find out the truth, Ellen talked to the tooth fairy. The tooth fairy had pink hair and a princess dress, and floated down from the sky in what Ellen called a Pier One chair. The tooth fairy said that kids ask for tens and twenties now for their teeth, and when the Kardashians lost their teeth, she had to give them diamond bracelets.

The Tooth Fairy said her accent was from Tooth Fairy Land which was next to Easter Bunny Island, which isn’t far from Santa Claus City. Then the Tooth Fairy asked to buy a million dollars. When Ellen said no, she also asked for a Walgreens gift card, or a selfie. Ellen said no to all of these.