Ellen DeGeneres spent her weekend watching more cable reality shows so she could bring us all the cream of the crop (or at least the craziest of the crazy). Here were the series she highlighted today. 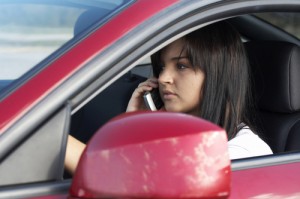 One woman took a phone call during her driving lesson in a show from Ellen's Reality Roundup.

The new National Geographic Channel series American Weed chronicles the challenges facing medical marijuana dispensaries in Colorado. In a clip from the show, Alex Douglas, the manager of a dispensary, struggled to explain the importance of inventory control, illustrating the short term memory problems sometimes associated with marijuana use.

Next on Ellen’s list was a Tru TV series that follows people who are being booked and processed in Las Vegas jails. A drunk woman sang Brandy and Monica before transitioning into “I’m proud to be an American, where at least I know I’m free.” That is maybe not the most popular song among prisoners.

The National Geographic Channel series Wicked Tuna follows tuna fishermen on the high seas. One boat captain emphasized the importance of giving back to the sea, from which they are getting food and making a living. He seemed high strung, and Ellen said she believed fishing was supposed to be relaxing.

This series follows people who are attempting to get a driver’s license. Irene is 28, and she was hoping to finally learn to drive, despite not even understanding the difference between the gas and brake pedals. She even took a call on her cell phone in the middle of her driving lesson.

“I think we should be able to vote if people get their license or not,” Ellen said.

In a web clip, an Australian grandmother reviewed The Black Keys while feeding kangaroos. Then she stood in the Australian countryside playing spoons to her favorite Black Keys song, “Lonely Boy.” She had some smooth moves and good footwork, and Ellen hoped the woman would get her own reality show.

Download an MP3 of “Things That Make You Go Hmm…” by C+C Music Factory.