Ellen started her show by talking about people who failed miserably on Wheel Of Fortune. The first clip was clearly “Magic Wand”, but the man guessed “Magic Hand” and tried a bunch of other guesses before realizing it. Another woman said “I Have The Wine By Johnny Cash” instead of “I Walk The Line By Johnny Cash”. The final clip showed a woman who said “Self-Potato” instead of “Self-Portrait.” 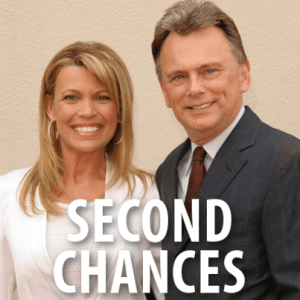 Ellen gave some losing players of Wheel Of Fortune a second chance on her Know Or Go game in a special Second Chance Edition. (s_bukley / Shutterstock.com)

Ellen felt bad for these people, so she invited them to play her game Know Or Go in a special Second Chances edition. The game works by people answering trivia questions and if they got it wrong, they have to drop down a trapdoor.

First up was Lolita, who guessed “Self-Potato” on Wheel Of Fortune. But what is it called when you take a photo your self? She guessed selfie, which of course, was right. Zach, the magic wand guesser, was asked what you would say if you’re waving a magic wand. He said hocus pocus. The next person was Natasha, who guessed “I Have The Wine” instead of “I Walk The Line.” So Ellen asked her to finish the song “Red, Red…” and she said, “Wine.”

Then Ellen asked Lolita how many Es there were in “Ellen DeGeneres”. Ellen helped her with the spelling, even, but Lolita guessed 7. It was actually 6. Lolita teaches first grade, so Ellen had to drop her down the trapdoor.

Then Zach was asked how you say May 5 in Spanish. He answered correctly with Cinco De Mayo. Then Natasha got the question, “Who is the current Vice President?” She clearly didn’t know. She tried really hard to answer, but she couldn’t come up with Vice President Joe Biden.

Finally, Zach had the question, what is the shop of a stop sign? He said octagon. But Ellen dropped him anyway. Each of the contestants got a 50 inch Insignia television.

Ellen: Twitch Step Up All In & This + That

Ellen asked her guest DJ Twitch if he has summer plans. He said Step Up: All In is coming out and the new season of So You Think You Can Dance started already. Ellen said he was one of her favorite dancers of all time. A lot of dancers in Ellen’s audience try to emulate his dance moves, but they just can’t. So Ellen combined audience dancing with animated cartoons. This was a hilarious segment where they added things like a wand to a dancer’s hand, or a T-Rex chasing a screaming girl. At the end of the video, Ellen said it was stupid.

Then Ellen showed a video where a guy tried to play the Wedding March for a wedding. Like Ellen said, it sounded like a guy who never fully learned the wedding march, so it was really bad.

Then Ellen announced a contest where Mattress Firm will be giving away mattresses and cash. Every day, at some point, sheep will go across Ellen’s screen. All you have to do is go to Ellen’s website to enter the number of sheep for a chance to win $25,000.

Ellen sent her writer Amy to Banana Republic to speak lyrics to people in one of Ellen’s best segments. For fun, this time around they had her wear a pregnancy belly. First, she had to speak the lyrics of Shania Twain’s “Man! I Feel Like A Woman!” to a couple. When she said, “I’m going to scream and shout. I’m going to get a lot out of line,” and the man in the couple said, “Well, not too far out of line. Looks like things could happen pretty quick.” Then she said the line, “Men, shirts, and short skirts,” in front of the clothes. A man responded, “This is a woman’s shirt.” Then she told him she wanted to be, “Free to feel the way I feel.” And the man said, “Me, too.” Amy switched to “Baby” by Justin Bieber and said the “Baby, baby, baby, oh,” part several times. One woman said the baby must be kicking her from the inside and that she remember what that was like, even though her own daughter was 52 now. Check out the hilarious video below: