Ellen In My Ear Highlights

Ellen DeGeneres loves to set up hidden camera pranks, like having Abraham Lincoln Scare People in a Photo Booth. Another of her favorite gags is sending someone out with an earpiece. Ellen speaks into the earpiece, and that person has to say or do whatever Ellen tells them.

She shared some of her favorite highlights from the past, featuring celebrities like Ann Curry, Jeff Foxworthy, David Beckham, and Jennifer Lopez. 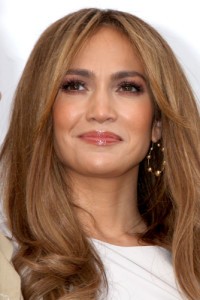 Jennifer Lopez was among the celebrities in on the joke when Ellen played hidden camera pranks. (Image Credit: Helga Esteb / Shutterstock.com)

Ellen In Your Ear Pranks

Ellen had Today Show anchor Ann Curry brush people’s faces with a microphone while interviewing them. A production assistant asked Jeff Foxworthy for an awkward hug.

David Beckham’s prank involved asking a massage therapist not to use her thumbs. Shouldn’t the masseuse have been able to see the earpiece?

Ellen In Your Ear: Jennifer Lopez

Jennifer Lopez did interviews with assistants, asking things such as, “Is my beauty distracting?”

Ellen had show writer Amy dress as a Michael’s Crafts employee giving a demo on how to make Halloween centerpieces, then touch her students on the head. Another time, Amy helped grocery store shoppers and told them nonsensical Knock Knock Jokes while tap dancing.

Modern Family star Sofia Vergara was instructed to laugh and then cry for employees at a store on the studio lot.

Ellen mentioned that you can see more of her hidden camera pranks. To find them, visit her Yahoo Shine page at shine.yahoo.com.

It seems like these pranks and hidden camera gags are coming back into popularity. The original Candid Camera show was decades ago, and this type of joke is still funny today.

In more recent years, celebrities were the target in the MTV series Punk’d. MTV also went after unsuspecting people in the game show style series Boiling Point. Now celebrities are pranking everyday people in CBS’s hidden camera series I Get That A Lot.

What would you do if you were the unsuspecting victim of a hidden camera prank? It’s definitely more fun to watch other people than have it happen to you.

I also don’t think I would be as brave as some of these people are if I had Ellen In My Ear!