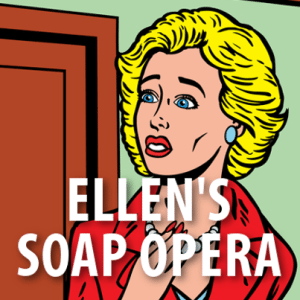 Ellen DeGeneres talked about the appearance of her senior photo in a Greek soap opera. (Danomyte / Shutterstock.com)

Ellen kicked off her show today by deciding to spin a wheel to determine what she would talk about at the top of the show. The wheel had a huge red section for Cat Videos, where she’d just show a cat video and discuss it, and a tiny green section labeled Brousko, which is a Greek soap opera. Despite Ellen’s not-so-secret wish to have it land on Cat Videos, the wheel landed on Brousko. “Who saw that coming? I’m as shocked as you are,” she said.

Ellen asked if there were any Greek soap opera fans in the audience. But there weren’t any so Ellen explained that Brousko is a popular Greek soap opera that Ellen had never heard of before one of her fans named Maria wrote in and told her about it.

She showed a clip that was unedited from the show, where a powerful vineyard owner reflects on his long lost love. The only problem? In the clip, the photo he is looking at as he remembers his long lost love is Ellen DeGeneres’ high school senior photo. So what happened? Why was her photo there? Ellen was very puzzled by this. She said she doesn’t even know Greek. “Is it supposed to be serious or funny?” Ellen joked.

Ellen said the funniest part about this is that for her last two years of high school, she moved to Atlanta, Texas. She said the morning of her senior photos, she woke up and tried to fix her hair and it wouldn’t work. She thought it didn’t matter because she was leaving the next day back to New Orleans. And who would ever see the picture? And now, apparently all of Greece. “If there’s anyone out there who watches this show, people from Greece, John Stamos, whoever, if you could explain what I’m doing with that old man…I don’t want to spoil the ending for you, but we are never, ever, getting back together,” Ellen joked. Ellen sent a signed picture of her senior photo to Maria to thank her for letting her know.

Then Ellen introduced the Detroit Academy Show Choir, who she had recently surprised with gifts and an appearance by Pharrell. They performed Pharrell Williams’ “Happy”. The kids are really talented and Ellen said they were there because she’d given them a trip to Disneyland and while they were in town, she wanted to have them on the show.

Ellen wanted to surprise a college student who skipped Spring Break to donate bone marrow to a complete stranger and saved his life. She wanted to give him $10,000, but she thought he should earn it. So when they flew him and his mom to L.A., Ellen sent one of her writers, Adam, to play a limo driver and pull a prank on them. He played a limo driver named Kevin and the first question he asked was how long they’d been together. Then he said he hoped it smelled okay in the back because he slept in the car last night. He offered them a water as he was drinking from a bottle of water and when they said yes, he offered the one he was drinking. He also asked the mom to signal that they were turning left, because the back turn light was out and he wanted to be safe. Then he drove them to a liquor store, where he picked up a six pack for himself because he was going to a party after work.

Finally, as he was letting the bags out of the limo, he gave them an extra one. When they told him it wasn’t their bag, he revealed that the bag contained $10,000 and that he worked for Ellen.