Decked out in a polka dot scarf, Ellen DeGeneres thanked everyone for taking time out of their busy lives to hang out with her. She said she wants to be sure everyone gets something out of watching her show. She rambled on about how important it is to her that she and her guests not waste our time.

To that end, she featured another edition of Ellen’s Reality Roundup. Ellen watches terrible reality shows so we don’t have to. 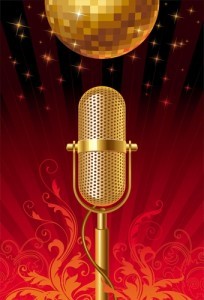 Ellen put DJ Tony to the test, to find out if he knows the words to the favorite songs he plays on the show.

Ellen featured a storyteller from the show Swamp People. He explained that you never know what is behind the noises you hear at night while out in the swamplands. Apparently there is a bear-like creature that runs around on its back legs and has just one red eye.

That sounds like a sasquatch. Maybe this man should call the team from Finding Bigfoot to investigate. If that’s what they left in, what kind of babble must have ended up getting cut out.

The Wiener’s Circle is a hot dog stand in Chicago, where employees make customers answer questions in exchange for free food or prizes. Ellen showed a clip from the show, which featured customers dancing wildly as the employees cheered her on. Later, the woman revealed her supple cleavage, to the particular delight of fry guy Johnny.

Next up was a reality show that follows adult men who still live with their mothers in the Bronx. After one man snuck his date out of the house, she argued with him about whether he should be taking his dates to a hotel instead of her home. Then they debated whether she should make breakfast for her adult son. Eventually she caved, which is just sad. Remind me never to watch this quality program.

Ellen raised some great questions about why he still lives at home, and even better, why any woman would go home with him.

Ellen: Does Tony Know The Lyrics?

Ellen said she likes to rib DJ Tony because he doesn’t know the lyrics to any of the songs he plays for everyone. That’s why she came up with a game called Tony Karaoke, which she said was a long time in the making.

She said the game is just like karaoke, except they didn’t give Tony the lyrics.The first featured song has been featured on the show more than 2,700 times. The song is “California Love,” and Tony did know some of the lyrics. But here is where he got off track:

“Now let me welcome everybody to the wild, wild west
A state that’s untouchable like Eliot Ness
The slug hits your eardrums like a slug to your vest
[Mumbles] –with a bomb ass state beat”

It didn’t get any better when Ellen moved on to the classic Madonna track “Vogue”:

I guess you really can be a DJ even if you don’t know the words to the songs you play. Next was “September” by Earth Wind and Fire.

For what it’s worth, he doesn’t have a horrible voice for karaoke. “I thought I knew them,” DJ Tony said. “I thought I did.” Ellen praised him for at least being a good sport.

Ellen said she made her Ellen Shop leftover Earth Day T-shirts into a car cover. Ellen always has the most impractical product ideas.

Today, Ellen and the audience danced to The Emotions’ “Best of My Love.”

Download an MP3 of “Best of My Love” by The Emotions.