Justin Willman is the host of Cupcake Wars on the Food Network, but he is also an incredible magician. Ellen loves Justin’s mind-boggling tricks, so she invited him back to her show where he demonstrated some of his very best. Have a look below at the magic tricks that Justin performed, and read on for full details. 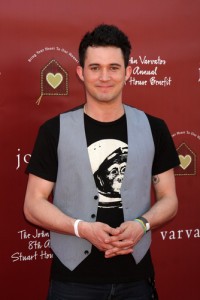 Magician Justin Willman showed off some of his best tricks for Ellen. (Helga Esteb / Shutterstock.com)

Justin’s first trick involved a deck of cards and a little bit of art historical knowledge. He asked Ellen to choose a card randomly from a deck, and then say what the most famous painting in the world is. Ellen answered The Mona Lisa. Justin was familiar with that one– it’s by Leonardo Di Caprio! Of course, he meant “the other Leo,” Leonardo da Vinci.

Justin proceeded to “paint” the Mona Lisa, and when he was finished, she was holding Ellen’s card!

Justin’s next trick was a bit more complicated. Justin pulled out a black and white “self-portrait” drawing that had spaces to color in the clothing. He also had a separate “envelope of mystery.” Justin closed his eyes and asked Ellen to color in the clothing– like the shorts, tie, and socks– doing each one in a different color.

When she was finished, Ellen showed Justin the drawing. Then, he pulled out a drawing from his mystery envelope, and it matched! But Ellen wasn’t convinced; she believed that Justin had more than one drawing inside. He did, in fact, but every single one of them was a match, too!

Just for fun, Justin also stripped off his shirt and pants to reveal the exact outfit that Ellen had just drawn. “I don’t even understand what just happened!” Ellen said. It was amazing!