Who would you call the most beautiful woman in the entire world? The editors of People Magazine chose Beyonce for the honor this year. Last year’s choice was Jennifer Lopez.

Ellen said there are many beautiful people in the world, and she humble bragged that she made it in the magazine as well. “Technically, it’s an ad,” she admitted, “but it’s in there.” 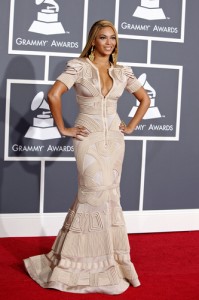 Do you agree with People Magazine's choice of Beyonce as the World's Most Beautiful Woman? (Image Credit: Joe Seer / Shutterstock.com)

Ellen’s latest book is a New York Times Bestseller. Seriously, I’m Kidding was released in fall 2011, and now it’s expanding around the world, with French and German editions.

She tried to read from the French version of her Cover Girl chapter, doing her best French accent as bistro music played. I don’t speak much French, but that’s OK because I don’t think Ellen does either. I’ll be sticking to the English versions of Ellen’s work.

The submissions keep pouring in for Ellen’s Dance Dare contest, and today’s participants included a doctor from Idaho, a mature woman in California, and a subway mime in New York City.

Dance is a great form of expression and it’s also healthy, which is why it wasn’t surprising to see athletes take up the challenge. A runner in California danced behind her peers, while a woman in Tobago did the Dance Dare on a golf course.

Someone in Australia went from a handstand into a dance, then pretended to be stretching when he got busted. A woman in scrubs, video store patrons, and shoppers in the home improvement and baby aisles of stores also got in on the act.

“I like when they get caught,” Ellen said, announcing that she’s sending JC Penney gift cards to those who were featured in today’s segment.

Ellen loves the hilarious miscommunications caused by our modern technology. Here are the funny text messages she shared today.

Funny Text Message Made For Ellen