Ellen shared more of her favorite Internet videos from around the web. First up was a baby named Brantley was was learning about the vacuum. He liked that it would gently pull at his shirt. It really seemed to make him laugh. Babies would be more fun and appealing if they laughed all the time.

“That, by the way, is exactly how I would clean a baby,” Ellen said. 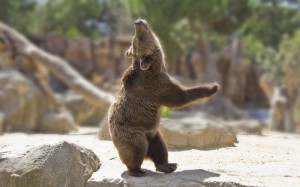 Ellen's funny videos included a bear dancing in the woods, which is hilarious when set to music.

Next up, two cats were finding their way out of an attic. As one braved the stairs, the other lent a gentle paw to help knock his friend down the stairs.

Watch Cat Knocks Other Cat Down Stairs on YouTube.

Ellen also found a video of a bear in the woods, taken using night vision photography. The bear is scratching his back against the base of a tree, but when set to dance music, it really appears that the bear is dancing.

Ellen always graciously makes cameos in movies like Titanic and The Iron Lady, only to end up on the cutting room floor. Such is the case with the most recent Tom Cruise sequel, Mission Impossible: Ghost Protocol.

She shared her supposed deleted scenes from the movie, now available on DVD. As Tom Cruise scales a skyscraper, Ellen is on the scaffolding washing windows, and she advises him not to look down, and not to leave fingerprints on the freshly cleaned glass.

Then she looked around for her missing co-worker, Linda. Finally, she noted that Tom Cruise looks good in capri pants, even though most men are afraid to wear them.

She expressed concern about the dangers of his plan to cut the glass and kick in a window, which does seem risky. You can see how the scene really turned out if you watch the movie, which the studio audience received for free.