“You had a kidney transplant, which I think a lot of people didn’t even know that you were sick,” Ellen said to Sarah Hyland, star of the hit comedy series Modern Family.

Unknown to many of her fans, Sarah has struggled with kidney dysplasia for over half her life.

“I had kidney dysplasia since I was eight or nine years old,” Sarah said. 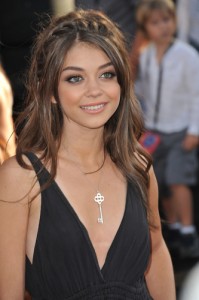 Ellen learned of Modern Family's Sarah Hyland Kidney Transplant, which she got from her father after years with Kidney Dysplasia. (Featureflash / Shutterstock.com)

Amazingly, after years of battling her kidney dysplasia, Sarah Hyland got a kidney transplant from her father, Edward.

Sarah said that since that transplant, she’s had to be very careful about her home environment because she can’t risk getting an infection since that could lead to her body’s rejection of the kidney. She said her boyfriend, Matt Prokop, has helped her a lot during this time.

Despite that she could have bragged, Sarah seemed very humble about the whole thing.

Sarah said she also questions why she’s at a more coveted place on the list than some of the beautiful women that she looks up to.

Showing Maxim‘s picture of Sofia stretching her torso out in a seductive postion, Ellen quips, “You could lay like that.”

“I don’t think it would look the same,” Sarah said.

Sarah Hyland recently agreed to be on a billboard with Ashley Tisdale in New York City for Ocean Pacific. As a joke, Ellen said that she was going to show the billboard. Then when she showed the billboard, she had photoshopped her head over Ashley‘s face. It was pretty funny.