Wanda Sykes just recently won a Gracie Award from the Alliance For Women In Media and Wanda Sykes said it was a great night. 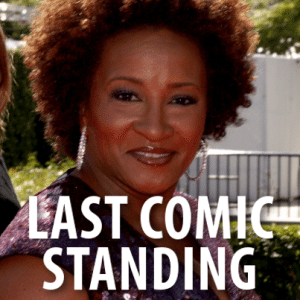 Wanda Sykes came by Ellen to talk about being mistaken for Deniece Williams at the Gracie Awards and producing Last Comic Standing. (Helga Esteb / Shutterstock.com)

Then the woman said that during her performance, they were all dancing and clapping for her. “And I’m like, I didn’t perform. I just accepted an award. Then I looked down at my sequenced top and I’m like, this woman thinks I’m Deniece Williams. I look absolutely nothing like Deniece Williams. That’s just two black woman in a shiny top,” Wanda Sykes said when they showed the pictures of the two of them side by side.

Wanda Sykes has two five-year-old twins and Ellen asked how they’re doing. She said they’re doing great. She’s teaching her kids how to say grace. Her daughter Olivia says grace and thanks the Lord for food. Then she goes on about unicorns and princesses and how she loves everyone and names specific people. Then she finishes, but she never mentioned her brother Lucas. So Wanda Sykes told her to say she loved Lucas and her daughter did it, but then looked to the sky and said, “But just a little bit.”

Wanda Sykes’s son is really bad at saying grace. He’ll just make noises. So Wanda Sykes doesn’t let him say grace. “I can’t have God getting on me and punishing the rest of the world for his disingenuous prayers. You know? He could really destroy some things,” Wanda Sykes joked. “That’s like poking God right in the eye.”

Ellen: Wanda Sykes Being A Minority In Her Own Home

Wanda Sykes said her kids are white and she’s the minority in her own home. “I have a house full of white people. I’m just taking care of a bunch of white people right now. That’s all I do,” Wanda Sykes said. She said she’s a proud black woman. She went to a black college. So she feels self-conscious about being the only black woman in her house. She said she can’t even vacuum in front of them.

“When I vacuum, everybody has to be out of the house. I can’t vacuum in front of them. It feels weird. I feel like the help. I like to hum when I vacuum, too. I can’t do that,” she joked.

Wanda Sykes is an executive producer of Last Comic Standing this year and Ellen is going to be a part of it as well. Wanda Sykes said she loves producing the show. “When you see a fresh comic, it’s so funny and it inspires me. So we’re having a blast,” Wanda Sykes said.

This year, the comics were all hand-picked through invitationals. This year, the judges are Roseanne Barr, Keenen Ivory Wayans, and Russell Peters. Wanda Sykes is a mentor this year.

Wanda Sykes and her family are going to France this summer. Wanda Sykes said that every time she flies first class, the ticket agent always asks her if she’s supposed to be in first class.

“I get asked so much that the last time this woman goes, are you in first class? I said, ‘No, I just like standing in wrong lines. This is just what I do. When I get tired of this, I’m gonna go down to the men’s room and stand in that line, too,'” she joked.