Everyone dances when they come on Ellen’s show. It’s inevitable. But when Wanda Sykes comes on, she only does a tiny little dance. Ellen DeGeneres vowed to get her friend dancing more in the future, or at least edit a montage of her short dance clips into one full length dance. 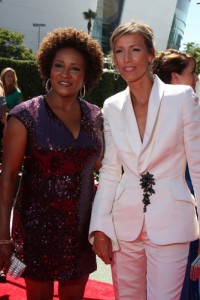 While in Mexico, Wanda Sykes marveled at the craftsmanship of the country's ancient pyramids. (Image Credit: Helga Esteb / Shutterstock.com)

Wanda Sykes just got back from Australia about a week ago, and she threatened to fall asleep on Ellen’s show due to jet lag. She said the trip there is great, because you go at night and you get to sleep. They even give you pajamas to wear so you’ll be comfortable.
ADVERTISEMENT

But she was offended that the flight attendant only offered her a choice of medium or large pajamas. “He just took small right off the table,” she said. “But I’ve got to be honest with you: those mediums were a little tight.”

Ellen has never been to Australia, but Wanda said she was there working at the Comedy Festival. She said she used her downtime to visit the animal santuary, “which really turned out to be like a retirement home for the animals. Every animal we saw was taking a nap,” she said.

The Koalas and Kangaroos spent most of their time asleep, but Wanda Sykes did get to pet a Dingo. She brought a picture, and everyone agreed that it looked like a dog. Ellen wondered if there are any tame Dingoes, and Wanda couldn’t rule out that she may have been taken advantage of.

Ellen said that her wife, Portia De Rossi, no longer has the thick Australian accent, but Portia’s family all shares it. Ellen said she likes it, but Wanda said it became annoying to her after about a week.

Then Ellen and Wanda tried to turn it around, because she said her show has a popular following in Australia.

Ellen wondered if Wanda and her wife share the same sense of humor. But Wanda said her wife Alex, who’s originally from France, doesn’t think she is funny. “She thinks she’s funnier than I am,” Wanda said, adding that she obviously disagrees. “She’s funny, but in a French kind of way.”

Wanda talked about her recent attempts to work out. She asked her wife to encourage her to go, and avoid starting a conversation so that Wanda wouldn’t get distracted and end up not going to the gym.

Her idea of encouragement was to call her names, which Wanda admitted was at least effective.

Ellen also recently spent some time in Mexico shooting a commercial. The photo of her in a sombrero seemed suspiciously non-work related. Wanda spent a free day visiting the pyramids in Mexico.

“They let you climb up the pyramids, and these things were built in 250 AD, and they’re still standing there,” she said. “That’s the craftsmanship they had back then. Stuff stinks today. That’s still standing there. I’ve got to put a new roof on every 10 years. What the hell?”