TV Westerns were at the height of their popularity in the mid-20th century, but actor Timothy Olyphant could be said to be single handedly reviving the genre, complete with a white hat.

The actor, star of FX’s drama Justified, sat down with Ellen for an interview, and Ellen revealed that GQ named him Most Stylish Dresser on TV recently. “It doesn’t come easy,” he said. “It’s odd because it came as a bit of a surprise.” 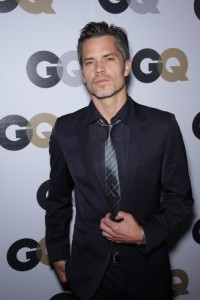 Timothy admitted that he doesn’t do much of his own shopping, and he feels he should be entitled to his character’s wardrobe. He said that wardrobe has factored into some of his decisions about acting gigs.

Timothy Olyphant has been married for over 20 years. He and his wife have three children, and he said that it’s an uncomfortable number.

“I remember talking about it, but I didn’t know we had committed” to a third child, he said. “But they’re good kids, and I think I’ve gotten used to them. It’s pretty clear to me at this point, we are keeping them.”

As for the family’s dogs, he is not so sure about their place in the family, saying that he named his Shiloh Shepherds Uh-Uh-Uh and No. Hey, it’s more clever than naming them Dog or Fido.

He said that he loves his dogs, but he doesn’t like feeling threatened by the dogs to go for walks. “Those are huge dogs,” Ellen said.

Now his kids are campaigning for more pets. “You can never have too many pets, unless you’re a hoarder, and then that’s too many,” Ellen explained.

The family’s pet collection now also includes a rabbit, guinea pig, and fish. He said they used to have a gecko, but it was a little too friendly and had to be pried off his daughter’s face.

Now, after a recent vacation, Timothy’s kids want some stray cats they met at a hotel. He said when he was a kid, his family fed stray cats but didn’t formally take them in.

He remembered seeing a stray in their neighborhood, so they started leaving food out and after a few days, the neighborhood cat was friendly with them.

He said they’ve named the cat Kitty, and it is not allowed in the house. That sounds like a reasonable policy to me, cutting down on vet bills and litter. But I’ve always been more of a dog person.

You know Ellen loves to give people underwear with her name on them from the Ellen Shop. Timothy thanked Ellen for gifting them to him during his last appearance on the show. “I’m not suggesting that’s the reason I’m back,” he said.

Ellen said they’re popular underwear, and audiences are jealous that guests of the show get them for free.

“How do you go about getting that quality of underwear with your name on it?” he asked. Ellen said she won’t put her name on inferior products, lying that she sews them by hand.

Timothy said that they are comfortable, but he is self conscious about wearing them to places like the gym. He is afraid of running into another star like Ben Affleck, who could also be wearing his Ellen Underwear to the gym.

“That would be adorable that both of you are wearing Ellen Underwear,” Ellen said. “Get a photo of that, if you see him.”

But he also wondered if he would be put in an awkward position with a guest who hadn’t gotten free underwear. Ellen put his mind at ease, saying that every guest gets them as part of their gift package for visiting her show.

But just to be safe, Ellen had her prop department create some custom velcro to cover up her name on Timothy’s Ellen Underwear.