New mommy Shakira said that her pregnancy was easy because she didn’t have morning sickness, but she couldn’t sleep at all. Her baby Milan is three-months-old and has big brown eyes. She researched everything that had to do with pregnancy and motherhood. Shakira even joked that she could deliver a baby on stage if needed. 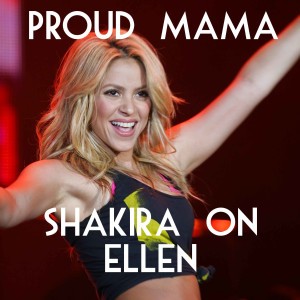 Shakira is obsessed with her first baby, Milan. She told Ellen how giving birth was terrifying and what she feared about her body after baby. (Image Credit: Gustavo Miguel Fernandes / Shutterstock.com)

Even though her pregnancy wasn’t bad, Shakira said that the birth shocked her the most. It wasn’t ideallic like everyone thinks it is.

“He’s purple and wrinkled? What is this?” she asked herself when she first saw her son.

Shakira said she was worried that her man, Gerard Pique, wouldn’t be attracted to her after giving birth. She compared her tummy to a shar pei dog. Gerard is an international soccer star, a very good looking man and an excellent father, Shakira confirmed.

Ellen gave Shakira and all of the mommies a personalized baby playmat. Milan will have fun playing in safety on the mat.

Shakira said that she started The Voice when she was six months pregnant. She said that the men treated her with kid gloves when she was carrying her son, but now that she’s back from giving birth all bets are off. No fear, Shakira can handle her own. She’s fought and won several of their arguments.

Shakira said that Adam Levine is a sharp and smart man, “deadly.” Blake Shelton is authentic and she really enjoys him. Shakira and Usher share the same disciplined and dedicated work ethic. She has enjoyed her time with all of these talented men.

“It’s like a group of friends playing monopoly,” she explained.

Shakira believes that her team is coming into it’s own on The Voice. She has young guns and seasoned pros to battle their way to the finals.

Ellen had one final Mother’s Day gift for Shakira. Baby Milan can know work just like mommy in his own The Voice judges chair. It spins around and has a button he can press and play with.